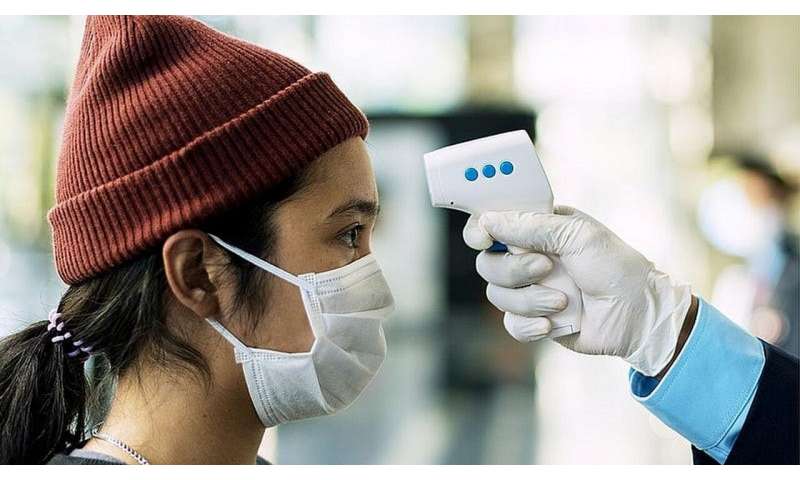 While a fever is one of the most common symptoms for people who get sick with COVID-19, taking one’s temperature is a poor means of screening who is infected with the SARS-CoV-2 virus that causes the disease, and more importantly, who might be contagious. That’s the conclusion of a perspective editorial by researchers at Johns Hopkins Medicine and the University of Maryland School of Medicine that describes why temperature screening—primarily done with a non-contact infrared thermometer (NCIT)—doesn’t work as an effective strategy for stemming the spread of COVID-19.

The editorial was published Dec. 14, 2020, in Open Forum Infectious Diseases, the online journal of the Infectious Diseases Society of America. The authors are William Wright, D.O., M.P.H., assistant professor of medicine at the Johns Hopkins University School of Medicine, and Philip Mackowiak, M.D., M.B.A., emeritus professor of medicine at the University of Maryland School of Medicine.

“Readings obtained with NCITs are influenced by numerous human, environmental and equipment variables, all of which can affect their accuracy, reproducibility and relationship with the measure closest to what could be called the ‘body temperature’—the core temperature, or the temperature of blood in the pulmonary vein,” says Wright. “However, the only way to reliably take the core temperature requires catherization of the pulmonary artery, which is neither safe nor practical as a screening test.”

In their editorial, Wright and Mackowiak provide statistics to show that NCIT fails as a screening test for SARS-CoV-2 infection.

From a November 2020 CDC report, Wright and Mackowiak provide further support for their concern about temperature screenings for COVID-19. The report, they say, states that among approximately 766,000 travelers screened during the period Jan. 17 to Sept. 13, 2020, only one person per 85,000—or about 0.001%—later tested positive for SARS-CoV-2. Additionally, only 47 out of 278 people (17%) in that group with symptoms similar to SARS-CoV-2 had a measured temperature meeting the CDC criteria for fever.

Another problem with NCITs, Wright says, is that they may give misleading readings throughout the course of a fever that make it difficult to determine when someone is actually feverish or not.

“During the period when a fever is rising, a rise in core temperature occurs that causes blood vessels near the skin’s surface to constrict and reduce the amount of heat they release,” Wright explains. “And during a fever drop, the opposite happens. So, basing a fever detection on NCIT measurements that measure heat radiating from the forehead may be totally off the mark.”

Wright and Mackowiak conclude their editorial by saying that these and other factors affecting thermal screening with NCITs must be addressed to develop better programs for distinguishing people infected with SARS-CoV-2 from those who are not.