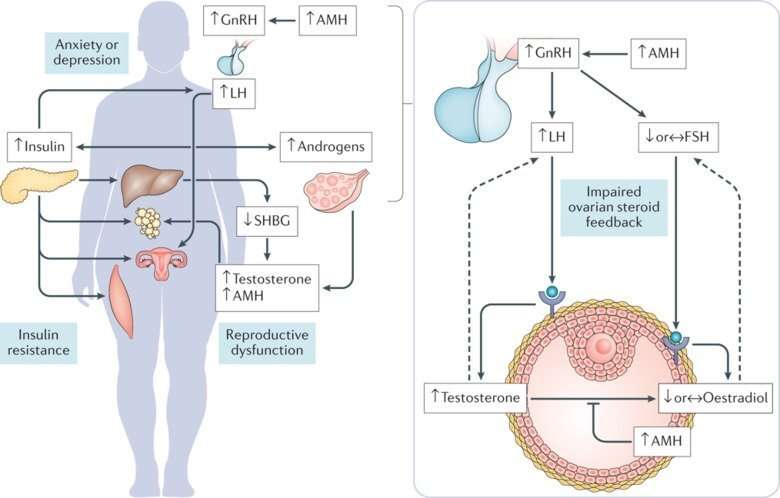 In a recently published review article in Nature Reviews Endocrinology, researchers conclude where the field of research is today, regarding the causes behind, and development of, polycystic ovary syndrome (PCOS). They also examine how epigenetic processes can contribute to the development of the syndrome.

Polycystic ovary syndrome (PCOS) affects over 10% of all women of reproductive age and is the most common cause of impaired fertility and the development of insulin resistance and type-2 diabetes, mental illness, and endometrial cancer.

Even though it is so common and has significant consequences, both for the women and for society, we don’t know the underlying causes of the syndrome and the treatment is therefore focused on relieving symptoms.

“Today, we know that women with PCOS have high levels of male sex hormone, and that there is a strong heredity. We have shown that daughters to women with PCOS have five times increased risk to develop PCOS and that it can be brought on to future generations. But how PCOS is brought on to future generations is still unclear,” says Elisabet Stener-Victorin, professor and group leader at the Department of Physiology and Pharmacology at KI, and one of the authors of the article.

Genome-wide association scan (GWAS) studies only explain about 10% of the heredity. Even other factors than genetic ones, for example the epigenetic processes, can lead to corresponding heredity through modification of cellular processes and whole body physiology without affecting the DNA sequence.

“The placenta plays an important role in protecting the growing fetus, and we and others have shown that women with PCOS have disturbances in the function of the placenta which can affect the fetus and it’s germ cells, and thereby theoretically contribute to the development of PCOS in the offspring through epigenetic processes,” explains Elisabet Stener-Victorin.

Studies have also shown that newborn daughters has an increased so-called anogenital distance, a sign of fetus exposure to male sex hormone in utero during pregnancy. Even sons of women with PCOS and their brothers have metabolic disorders.

“This is only shown in small clinical trials and if also men can be passed on the syndrome and associated diseases to future generations is something we need to study further,” says Qiaolin Deng, co-author and Ph.D., lecturer and group leader at the Department of Physiology and Pharmacology at KI.