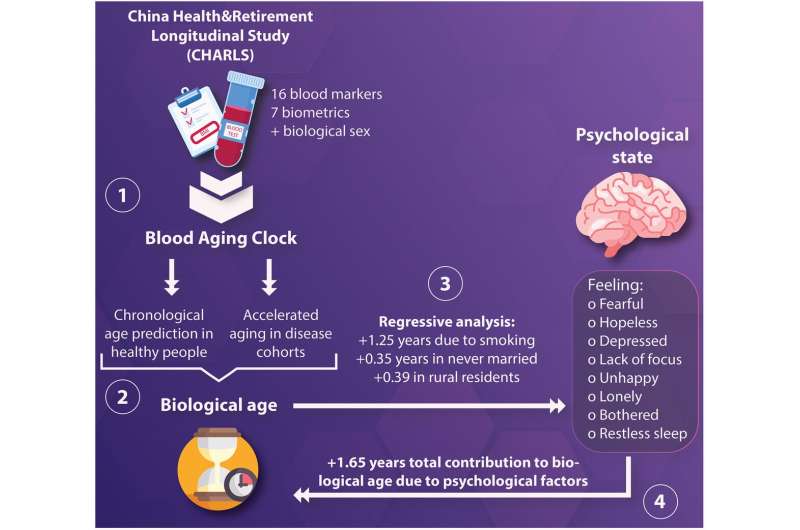 Aging clocks are statistical models that enable measurements of biological age, as opposed to chronological age. While the latter is determined by one’s date of birth, the former depends on the intensity of aging processes and can be affected by genetics, life choices, and the environment. Most commonly, such aging clocks are regressors, trained to predict a person’s chronological age based on a vector of input parameters, such as clinical blood test results, gene expression levels, or DNA methylation intensities.

“Using data from the Chinese CHARLS database, we have demonstrated that organismal aging is not only determined by physical factors but also, to a certain degree, affected by mental state and social status.”

The clock detects accelerated aging in people with heart, liver, and lung conditions. The researchers demonstrated that psychological factors, such as feeling unhappy or being lonely, add up to 1.65 years to one’s biological age, and the aggregate effect exceeds the effects of biological sex, living area, marital status, and smoking status. They concluded that the psychological component should not be ignored in aging studies due to its significant impact on biological age. The study findings further support the necessity of companionship and a psychologically pleasant environment for healthy longevity.

“We interpreted biological age as a proxy for the general state of health and show that positive feelings (happiness, hope, safety) have a significant impact on the former.”