American children have seen an explosion of gender dysphoria with cases more-than doubling in recent years.

Prescriptions for puberty-blocking drugs among under-18s doubled between 2017 and 2021, while scripts for hormone therapies have seen a similar rise.

Patrick Brown, a fellow at the Washington, DC-based Ethics and Public Policy Center, told DailyMail.com the data matches the perception many have that there are an increased number of children receiving this type of care.

The data – based on reports from health insurers- come as studies show the number of ‘top’ surgeries being carried out on children has risen 13-fold in the last decade.

Debate about whether there should be restrictions on child gender care have intensified in recent months as an increasing number of former patients who regret having the irreversible procedure come forward and claim they were not challenged enough as children. 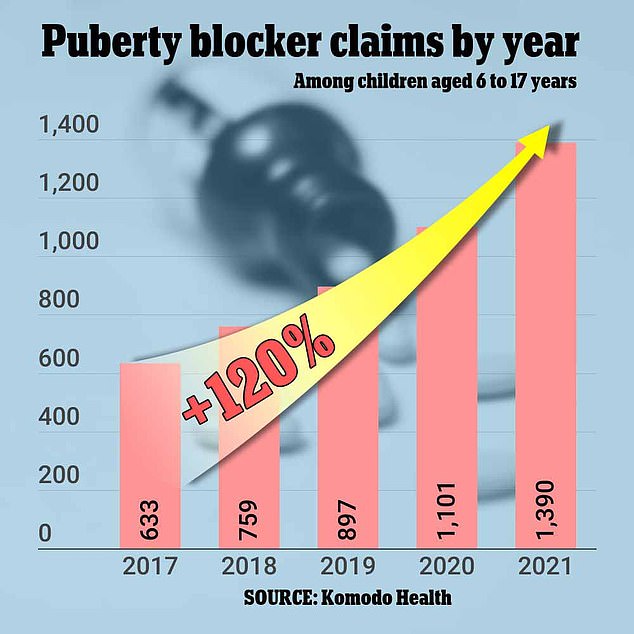 The above graph shows insurance claims for puberty blockers in the United States by year, which delay the onset of secondary sexual characteristics — such as facial hair and a deeper voice in boys. It shows claims have doubled since 2017 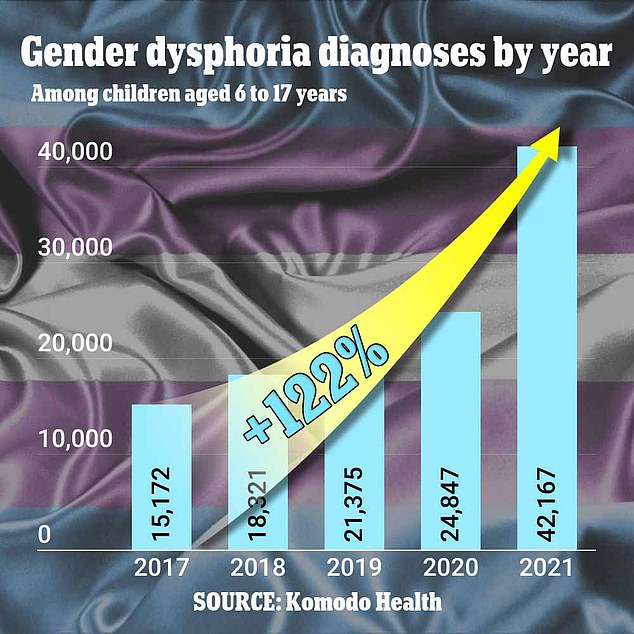 The above shows insurance claims for diagnoses with gender dysphoria – or a different gender to that assigned at birth – by year. These have also doubled since 2017 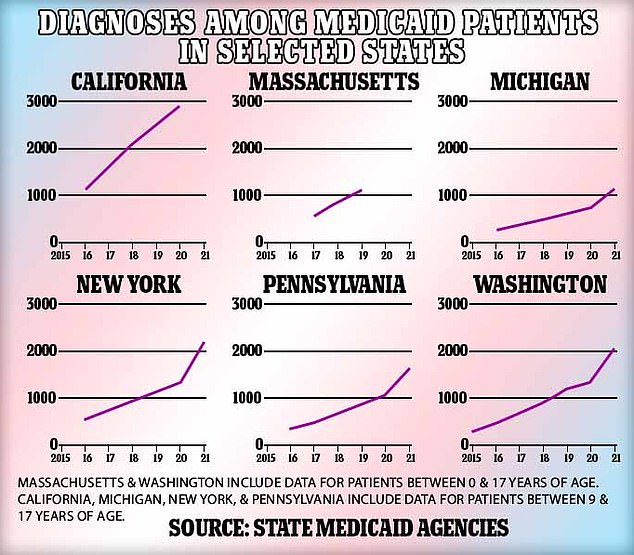 The latest data was collected by Komodo Health, an analytics company monitoring health insurance claims to private and public healthcare providers in the US like Medicaid.

There is no national database on transgender claims in America.

Kristin Beck, 55, has detransitioned and reverted to his previous name, Chris Beck, calling transitioning ‘the worst mistake’ of his life.

The figures show there were 1,390 puberty blocker prescriptions for children aged six to 17 years old in 2021.

This was more than double the 633 claims that were recorded in 2017, five years earlier.

Puberty blockers delay the onset of secondary sexual characteristics, such as facial hair and a deeper voice in boys.

Some doctors argue this gives patients time to decide whether they would like to continue with transgender care, before their body matures into a sex that does not align with their gender identity.

For hormone therapy — which can trigger secondary-sexual characteristics of the desired gender — there were 4,231 claims in 2021 compared to 1,905 in 2017.

States seeing sharp upticks included New York, where they quadrupled over five years, and California, where they doubled.

Meanwhile, Komodo Health data showed that top surgeries for 13 to 17-year-olds — the removal of breasts — were also trending upwards, although at a slower rate.

The data on puberty blockers did not include non-trans people who were prescribed the drug because they started puberty too early.

The number of gender reassignment surgeries being carried out on American children has risen 13-fold in the last decade, a study suggests.

Researchers looked at the number of mastectomies — sometimes called ‘top surgery’ — performed on girls under 18 at a major health system in California since 2013.

The operation involves surgically removing breast tissue and flattening the chest of biological girls who are trans, so they can feel aligned with their gender identity.

As gender-affirming care becomes more popular among children, an increasing number of patients who regret having the irreversible procedure have come forward and claimed they were not challenged enough as children.