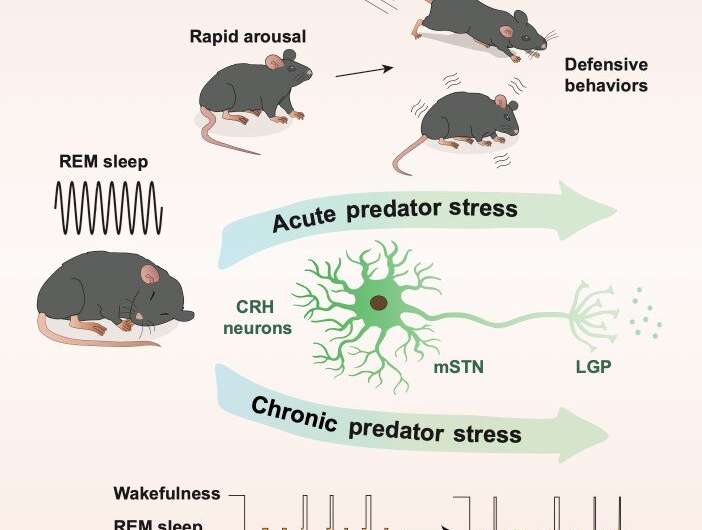 Rapid eye movement (REM) sleep brings about brief but periodic awakenings. In 1966, Dr. Frederick Snyder reported the “sentinel” function of REM could help animals prepare a fight or flight response against potential predator attacks. However, to date there has been no experimental evidence for this hypothesis.

Now, a research team led by Dr. Wang Liping from the Shenzhen Institute of Advanced Technology (SIAT) of the Chinese Academy of Sciences has reported a common circuit regulating both innate fear and REM sleep, which has proved this hypothesis.

The study was published in Neuron on Jan. 21.

In the experiment, the animals slept in a sealed chamber and were exposed to trimethylthiazoline (TMT) odor, a stimulus indicating the presence of a predator.

“TMT triggered rapid arousal from REM sleep but not from non-rapid-eye-movement sleep. This suggests that REM sleep has specific properties that allow rapid arousal in response to predatory stimuli,” said Dr. Wang.

By combining in vivo neural activity recording and cell-type specific manipulations, they found that mSTN-CRH neurons produced a lowered arousal threshold during REM sleep for detecting predator threats, as well as increased defensive responses after awakening.

This is an example of how evolution leads to two distinct but related functions for the same set of neurons rather than two completely separate neuronal networks. “We may hypothesize that natural selection favors optimizing existing neural circuitry for efficiency in signal transduction and energy usage over metabolically more expensive solutions,” said Dr. Wang.

The co-occurrence of increased REM sleep and stress-related mood disorders has been observed in clinical studies. The new findings in this study offer a potential evolutionary explanation of this phenomenon and elucidate the underlying neurobiological mechanism.