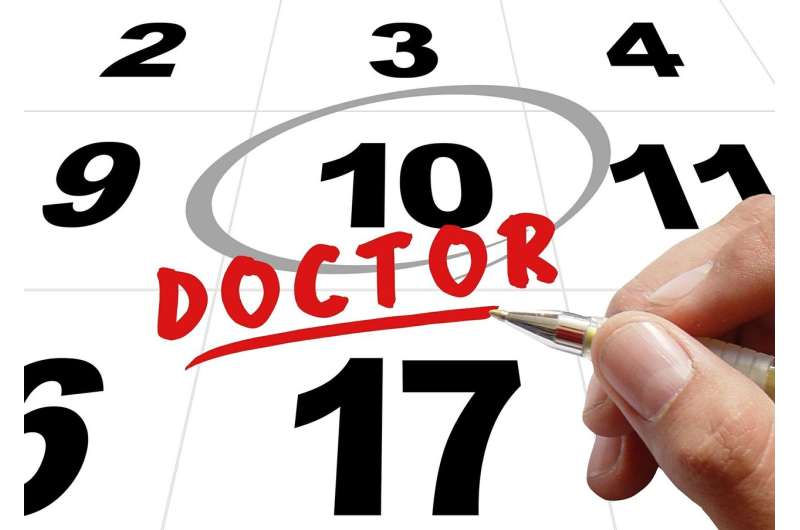 A new academic study demonstrates for the first time that scheduling medical appointments later in the week increases patient attendance by over 10%.

Missed appointments are a long-standing challenge for the UK’s National Health Service, increasing costs and reducing already strained services. Research has shown that missing appointments can have a deadly impact on patient health. NHS analysis in 2019 found that more than 15 million GP appointments are wasted each year because patients fail to turn up or warn surgeries they will not be attending.

The new research, carried out by a team from the universities of Bath, York and London School of Economics and Political Science, published today 29 September in PLOS ONE, assessed the effect of moving hundreds of appointments in a community mental health clinic in Scotland to later in the week. Over the course of one year they found it increased attendance by 10%.

The work builds on previous research, conducted by the same team and carried out a decade ago, which identified a “weekday effect” for appointments in hospital and GP settings. Its analysis showed that patients were more likely to miss appointments on Monday, and most likely to attend them on Friday.

“We don’t fully understand what’s causing patients to favor end-of-the-week appointments over those at the start of the week, but it could correlate with how people mentally associate with different days of the week, which typically becomes more positive as the week progresses,” said Dr. David Ellis from the University of Bath’s School of Management. “The start of the week can sometimes feel frenetic, balancing work and life schedules.

“People often avoid medical appointments because they’re fearing bad news, or they’re dreading a particular treatment, or they feel they don’t get on well with the staff. It could well be that attendance improves as mood improves, and later in the week people find it easier to face medical appointments.”

“Missingness” in health care often focuses on what missed attendance means for a service, particularly in terms of financial expense; however missed appointments can have serious impacts for patients. Improving attendance can help mitigate these issues. Attendance could be increased further by sending reminder texts and phone calls, which are widely used measures.

However, the researchers emphasize that the weekday effect does not detract from significant and complex issues behind missed appointments, such as high levels of deprivation and those suffering from multiple long-term conditions. Nor, they say, would it resolve pressing policy challenges around access to appointments, particularly in General Practice, which require longer-term funding and structural changes.