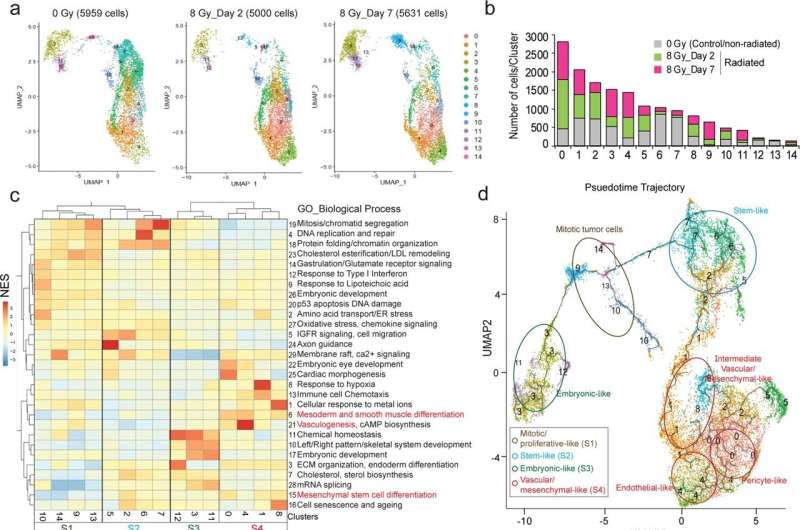 Research led by doctors and scientists at UCLA Jonsson Comprehensive Cancer Center and the UCLA Jane & Terry Semel Institute for Neuroscience & Human Behavior have identified a gene that may provide a therapeutic target for the deadly, treatment-resistant brain cancer glioblastoma multiforme (GBM).

The gene, P300, enables GBM cells that have been damaged by radiation therapy to recover by rearranging DNA, and initiating a molecular mechanism that refortifies tumor cells for growth and survival. Blocking P300 disrupted its ability to set this process in motion, according to the researchers, who conducted their studies in mouse models and in human GBM cells. Their results appear online in Nature Communications.

Although glioblastoma is considered rare—about 13,000 new cases are expected to be diagnosed in the United States this year, according to the National Brain Tumor Society—it is the most common primary brain tumor in adults. There is no known cure, and the average length of survival is measured in months. GBM cells and their precursors, glioma stem cells (GSC), quickly adapt and recover from injury, so chemotherapy and radiation therapy, which may initially slow a tumor’s progress, can ultimately contribute to growth and recurrence..

By performing single-cell transcriptomic sequencing, which can identify molecular changes in cancerous cells, the UCLA-led research team showed that radiation therapy-induced stress promotes phenotypic conversion of glioma stem cells to resemble two types of cells that are normally found in blood vessels (vascular endothelial-like cells and pericyte-like cells). They found that these converted cells promoted tumor growth and post-treatment recurrence. The conversion was brought about by changes within specific vascular gene regions in a process mediated by the gene P300, or P300 HAT (histone acetyltransferase).

“Our findings show at the single-cell level that ‘radiation-stress’ alters the functional states of glioma cells, but instead of reconstituting the vascular system to carry blood supply, as has sometimes been theorized, these converted cells provide trophic support that enables the cancer cells to survive and grow under the hostile conditions created by radiation,” said senior author Harley Kornblum, M.D., Ph.D., a researcher at the UCLA Jonsson Comprehensive Cancer Center and the UCLA Brain Research Institute.

“Just as P300 plays a key role in changing the molecular landscape of glioma stem cells, inhibiting the gene’s function appears to block the phenotypic conversion. This suggests that small molecules that inhibit P300 HAT activity may be useful in preventing tumor growth and adaptive resistance of GBM,” said Dr. Sree Deepthi Muthukrishnan, Assistant Project Scientist and the first author of the study.