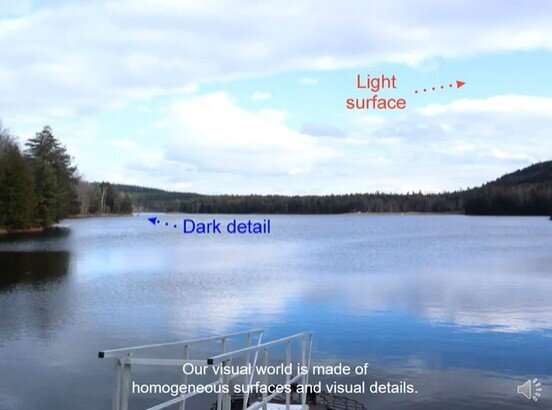 Everyone with good vision knows the difference between a bright and dark day. In a bright day, the sky forms a homogeneous blue surface that can reflect as much as 30,000 cd/m2 of light whereas, in a dark day, the clouds can cut the sky luminance down to 5,000 cd/m2 or less. As the night sets in, the sky turns even darker and can reflect less than 1 cd/m2 in a brightly illuminated city.

If you ask a naïve subject what makes a scene bright, you will probably be told that it is the light intensity coming from large surfaces such as the sky. However, if you ask a neuroscientist, you will get a complicated answer. Cortical neurons have specialized filters called receptive fields that are thought to be activated by small stimulus features but suppressed by surfaces. Therefore, neuroscience tells us that surface perception emerges from neuronal responses to the surface borders and not the surface interior.

In other words, a large homogeneous sky covering most of the visual scene appears bright because its border with land or water has high luminance contrast, and not because its surface is very bright. As you probably guessed, some neuroscientists are beginning to challenge this explanation, and the best answer to our question is that we do not know. We do not know how we perceive large surfaces including the sky and do not know how we distinguish a bright day from a dark day.

Scientists now demonstrate that small bright stimuli activate only half of the cortical neurons representing the same point in visual space, the ON neurons. However, large bright surfaces activate both ON and OFF neuronal types, and the combined ON+OFF cortical response increases with both surface brightness and surface size.

They also demonstrate that this interaction between brightness and size is already present in nature and that, as natural scenes become brighter, the light surfaces also become larger. Therefore, against current belief, the new findings demonstrate that both the interior and edges of bright surfaces drive strong cortical responses and scenes appear brightest when they generate the strongest neuronal population responses from primary visual cortex.

The primary visual cortex signals the onset of light and dark stimuli with ON and OFF cortical pathways. In this study, the scientists demonstrate that both pathways generate similar response increments to large homogeneous surfaces and their response average increases with surface brightness. They show that, in the cat visual cortex, response dominance from ON or OFF pathways is bimodally distributed when stimuli are smaller than one receptive field center but unimodally distributed when they are larger.

Moreover, whereas small bright stimuli drive opposite responses from ON and OFF pathways (increased versus suppressed activity), large bright surfaces drive similar response increments. The researchers show that this size-brightness relation emerges because strong illumination increases the size of light surfaces in nature and both ON and OFF cortical neurons receive input from ON thalamic pathways. They conclude that visual scenes are perceived as brighter when the average response increments from ON and OFF cortical pathways become stronger.