Home » Health News » Specs with tech: The glasses promising to tackle a range of problems

Specs with tech: From boosting flagging energy to beating dry eyes, should you set your sights on the glasses that promise to tackle a range of problems?

Almost 70 per cent of people in the UK wear some sort of glasses to correct their sight. But there are now special glasses to ‘treat’ eye problems — and conditions that apparently have nothing to do with your eyes.

Adrian Monti asked the experts to assess some. We then rated them.

Claim: Space-age-looking specs with rechargeable LED lights in the frame that shine blue light, mimicking broad daylight, into your eyes which is said to ‘boost your energy, enhance mood, eliminate fatigue and regulate sleep patterns’.

They are also said to help tackle jet lag. There is a phone app to help work out the best time of day to wear them.

Expert verdict: ‘These glasses use blue light to tell our body not to go to sleep,’ says Samer Hamada, a consultant ophthalmic surgeon at Queen Victoria Hospital NHS Trust in East Grinstead, West Sussex, and the Eye Clinic London.

‘But you would get the same effect if you simply opened your curtains or went outside.

‘I think a more useful pair of glasses would be ones to reduce exposure to blue light — which we absorb from screens as well as sunlight — as it may increase the risk of age-related macular degeneration (AMD), when tiny light-sensitive cells in the retina degenerate, and contribute to eye strain.

‘These might help some people stay awake if suffering from jet lag for instance, but these are not something I would recommend.’ 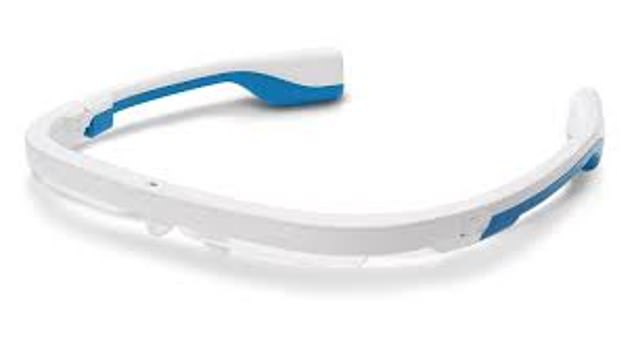 Claim: Aimed at those with amblyopia, or ‘lazy eye’, these have an electronic shutter — like those inside a camera —which blocks the good eye from seeing several times per second, forcing the weaker eye to work harder. This, says the maker, will gradually improve vision in the weaker eye.

Expert verdict: ‘A ‘lazy eye’ stems from a problem with the connection between the eye and the brain — the brain ignores one eye and relies more heavily on the other,’ says Bavin Shah, a behavioural optometrist and director of Central Vision Opticians in Finchley, North London.

‘Usually in children it’s treated by wearing a patch over the good eye. This can be successful if it’s picked up early but often, doesn’t help to make eyes work together, it just enhances the weaker eye. These look like they would work, but more studies are needed.’

Claim: Clip-on lenses to attach to your existing spectacles (or can be made as separate prescription glasses) which the maker says incorporates a new type of filter claimed to reduce eye strain and migraines. The filters are said to cut out flickering from the likes of fluorescent lighting.

Expert verdict: ‘These glasses use a type of mesh filter — which can’t be seen by the wearer — sandwiched between the lenses,’ says Mr Hamada.

‘The makers say themselves there is ‘no obvious reason why’ they should work.

‘I couldn’t find any independent evidence they were safe and effective. I’d want to see proper studies before I was convinced they could help those with migraines.’

Claim: These look like swimming goggles and the maker says they help with a variety of eye conditions including dry eye and blepharitis, when the eyelids become red and swollen.

Once switched on and allowed to warm up for 15 minutes, you moisten the rings in the eye piece with mineral water or saline solution.

The heat, says the maker, will unblock glands in the eyelids which produce an oily secretion, meibum, that prevents the evaporation of tears that moisten eyes.

Use for ten minutes twice a day.

Expert verdict: ‘Some of my patients who suffer with dry eyes swear by these goggles and use them every day,’ says Mr Shah.

‘A randomised controlled trial carried out by German researchers in 2012 showed this type of device appeared to provide more effective warming than simply warm and moist compresses.

‘These goggles are expensive, but if you do have an ongoing dry eye problem, they may be worth investing in.’ 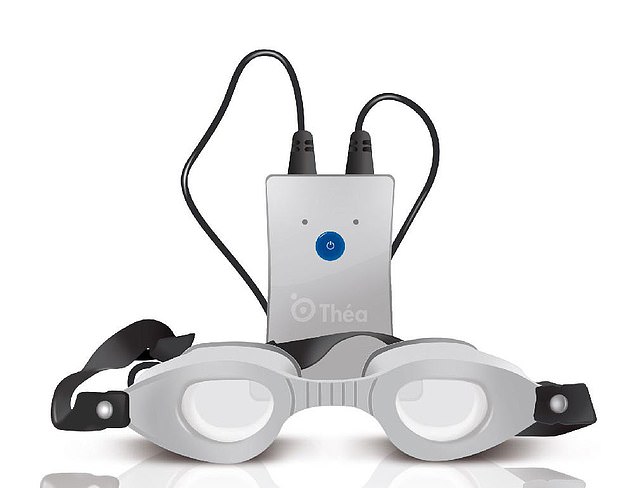 Claim: The lenses have a yellow tinted filter, designed to help with central-vision loss, the part of our vision that allows us to see fine details.

This may be due to conditions such as AMD. The makers say the yellow filter gives higher contrast and better definition.

Expert verdict: ‘People with macular degeneration can’t see as much detail and when there’s a change of lighting their eyes take much longer to adapt,’ says Mr Shah.

‘The yellow glasses do not improve central vision loss directly, but instead the yellow tint improves the contrast of objects and so the detail is a bit easier to see.

‘If you suffer from AMD, it’s worth giving them a try. You might be able to see a cup on a table more clearly. But these glasses won’t work for everyone.’ 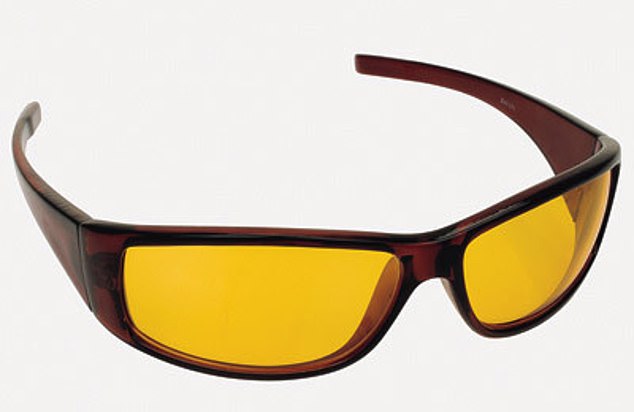 Claim: These glasses have a grid of tiny pinhole perforations covering each lens, said to help you focus better by shielding your vision from indirect rays of light that might distort vision.

The maker says they will help those who are either long or short-sighted.

Expert verdict: ‘If your sight is out of focus and you look through a small pinhole, it will cut out the edges of the blur and so make the sight clearer,’ says Mr Shah.

‘When people first put pinhole glasses on, they might feel ‘wow’ but it’s a bit of an optical illusion. It is extremely restrictive, meaning you wouldn’t be able to use your full field of view and peripheral vision. You couldn’t drive with pinhole glasses.

‘These will not help anyone’s vision, whatever issue they may have.’ 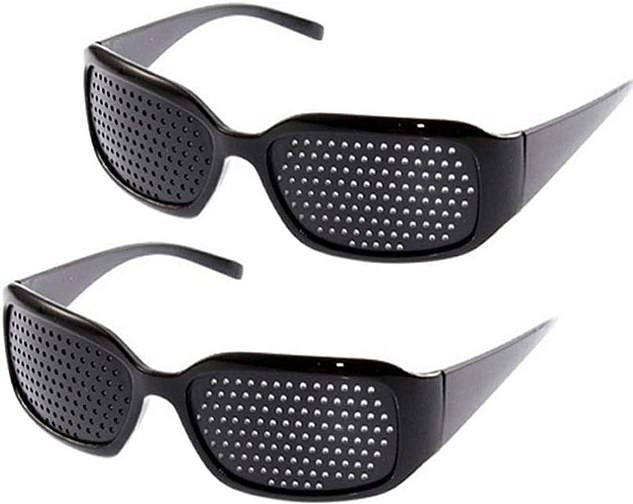 Glasses that talk to the blind

Claim: A device the size of a highlighter pen that slots on to the side of your frames using magnets.

Designed for those with low vision, its tiny, smart camera will ‘read’ back any printed or digital text. Within seconds the text is spoken back to you via an earpiece.

Expert verdict: ‘This will not improve eyesight, but should allow the user to live more independently and improve their quality of life,’ says Mr Hamada.

‘It’s an amazing piece of kit, but is very expensive.’

For seeing at night

Claim: Rimless glasses which are polarised (laminated with tiny vertical stripes) to help cut out glare from bright headlights. The lenses are also yellow which the makers claim makes colours and objects clearer.

Expert verdict: ‘Usually when sunlight reflects off a surface such as a vehicle bonnet or window the light is reflected back in horizontal waves,’ says Mr Hamada.

‘But because polarised glasses only allow light in a vertical direction to enter the eye, the horizontal light cannot get through. They are fine to wear in daytime as they stop glare caused by sunlight reflecting off car windows and paintwork, but not at night.

‘As there is a lack of light around, they would make things too dark to be safe to drive wearing them.

‘In fact, a study published last year in the journal JAMA Ophthalmology, carried out by researchers at Harvard Medical School in the U.S., found that the overall reaction time of people detecting a pedestrian in their path while wearing yellow-lens glasses was slower than when they weren’t wearing them.

‘I would recommend if patients are having trouble driving at night, first have an eye test. If they do need prescription glasses, an anti-reflective coating can be helpful for headlights.’ 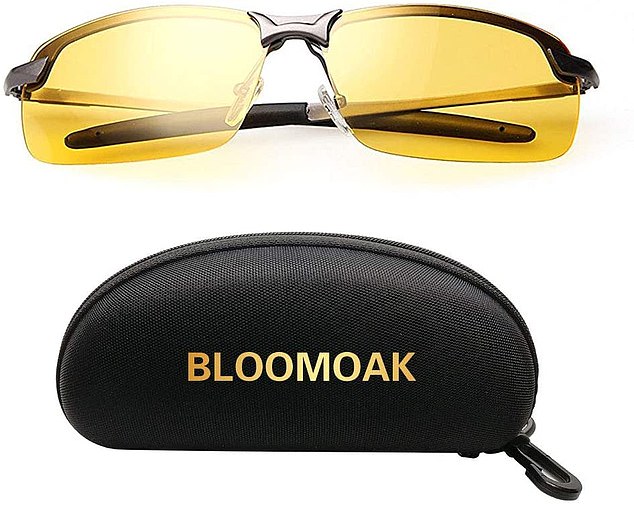