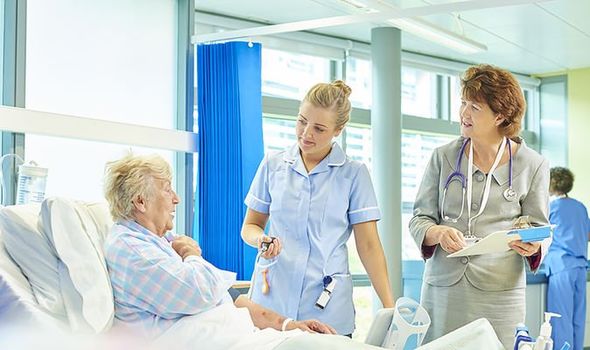 Hard-pressed frontline workers face intense pressure across every part of the health service. As the Express witnessed the daily battles at a major hospital, one critical care doctor summed up the reality of coping with the pandemic: “If we have someone on this unit who takes up 30 days with Covid, that’s 15 or 30 heart operations or cancer operations we can’t do.”

Health leaders last night urged people to get vaccinated. Health Secretary Sajid Javid called for “every single person” to play their part in easing the burden on the NHS this winter.

The service is being brought “to its knees” even in the absence of any major Covid surge, according to new figures.

Doctors have raised concerns that patients are dying in ambulances and in corridors because emergency units are so busy.

“In a normal year any one of these would ring alarm bells.

“Taken together before winter has even begun, they suggest a health and care system running hot for such a sustained period while still dealing with Covid-19 is now on its knees.”

A poll of NHS bosses found nine in 10 felt the current situation ‑ dealing with the pandemic-induced backlog and Covid cases ‑ is “unsustainable”. More than 5.8 million people were waiting to start planned treatment in England at the end of September, including 300,000 who had waited over a year. In September 2020, the waiting list was 4.35 million.

With more than 1,000 patients in ventilator beds across Britain, hospital staff are still having to dedicate too much time and resources to the Covid battle while also juggling other pressures, it was said.

One medical leader warned the service was at “tipping point”.

It came as the Daily Express joined heroic staff on the frontline at a major London hospital, who told of the intense pressures in the health service.

In October, major A&E departments treated more than 1.4 million people ‑ the highest ever for the month and the third-highest of all time.

Data showed a record 7,059 had to wait more than 12 hours at A&Es from a decision to admit to actually being admitted – the highest for any calendar month since records began in August 2010.

And some 121,000 people waited at least four hours – the highest monthly total on record.

Mr Javid said: “I am incredibly grateful to NHS staff.

“As we head into the winter months we know staff will face more pressure, with more people than ever coming forward for help.

“We’ve invested billions to support the NHS over the winter period including dedicated funding to help get patients out of hospital and free up beds.

“But every single person can play a part in helping the NHS and relieving some of the strain the health service is under.”

Meanwhile, 42,408 new Covid cases were confirmed in the UK yesterday, with 195 deaths.