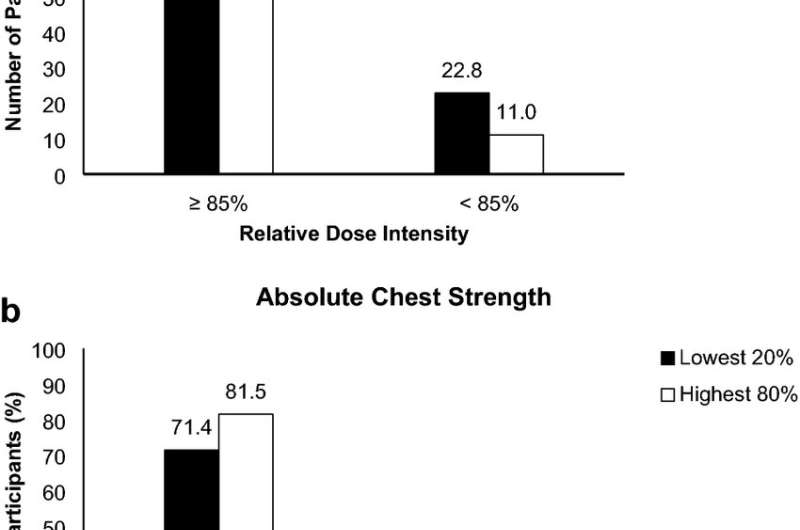 Breast cancer patients who were in better physical condition completed more of their chemotherapy treatments, according to a University of Alberta study that gives physicians further guidance in individualizing treatments and preparing patients for the road ahead.

“Clinicians often talk about patients being fit for chemotherapy, but no one ever had looked at actual physical fitness variables to see if they influence a breast cancer patient’s ability to complete their chemotherapy,” said cancer researcher Kerry Courneya, Canada Research Chair in Physical Activity and Cancer in the Faculty of Kinesiology, Sport, and Recreation and member of the Cancer Research Institute of Northern Alberta. The study was led by Courneya’s research associate Ki-Yong An.

“This study was the first to look at how muscular strength and aerobic fitness may influence chemotherapy treatment adherence.”

One of the most important elements for breast cancer patients on the road to recovery is completing all of their chemotherapy, Courneya explained. Still, if the side-effects of the drugs take too great a toll, physicians will often reduce or delay treatments beyond the recommended guidelines.

He noted the general rule of thumb is that 85 percent of the planned chemotherapy protocol needs to be completed if treatment is going to be optimally effective.

“The goal is to make sure we can get patients through these difficult chemotherapy treatments and complete as much of it as they can.”

Previous studies looked at body composition, with some evidence suggesting that breast cancer patients with higher body fat or lower muscle mass might not complete as much of their chemotherapy.

Using that same data, his team found that breast cancer patients in the highest 20 percent of aerobic fitness had an 89 percent chance of completing their treatment, compared with 77 percent for the less fit patients. Similar discrepancies were shown for chest strength, with the strongest 20 percent completing their treatment in 82 percent of cases versus 71 percent for the lowest 80 percent.

Though these results give physicians and patients an immediate next step in treating breast cancer, Courneya said the tricky part with intervening with “prehabilitation” is that the window between diagnosis, surgery and chemotherapy can be relatively short—six to 12 weeks.

And while that is certainly enough time to make some physical fitness inroads, Courneya said knowing a patient’s fitness level could also be useful for physicians in formulating a plan of action. This would include everything from the chemotherapy regimen chosen to the selection of supportive care drugs to prevent side-effects such as nausea, vomiting and low white blood cell counts.

“If physicians know they have a deconditioned breast cancer patient in front of them, then they know that patient’s chances of completing the chemotherapy are a bit lower and they can choose a more appropriate chemotherapy protocol or offer prophylactic supportive care drugs,” he said.