Revealed: Supermarket hot cross buns can contain as much sugar as FOUR chocolate digestives, more calories than a Krispy Kreme doughnut and be twice as salty as a packet of Walker’s ready salted crisps

The sweetest option contained 19.4g of sugar — the equivalent of four McVitie’s chocolate digestives, while one Easter snack had 0.83g salt, making it twice as salty as a packet of Walker’s ready salted crisps.

And more than a third of the products had more calories than a Krispy Kreme glazed doughnut, with the worst offender containing a fifth more (235 calories).

Britons are advised to eat no more than 6g of salt (around one teaspoon) and 30g of added sugar (approximately seven sugar cubes) each day. 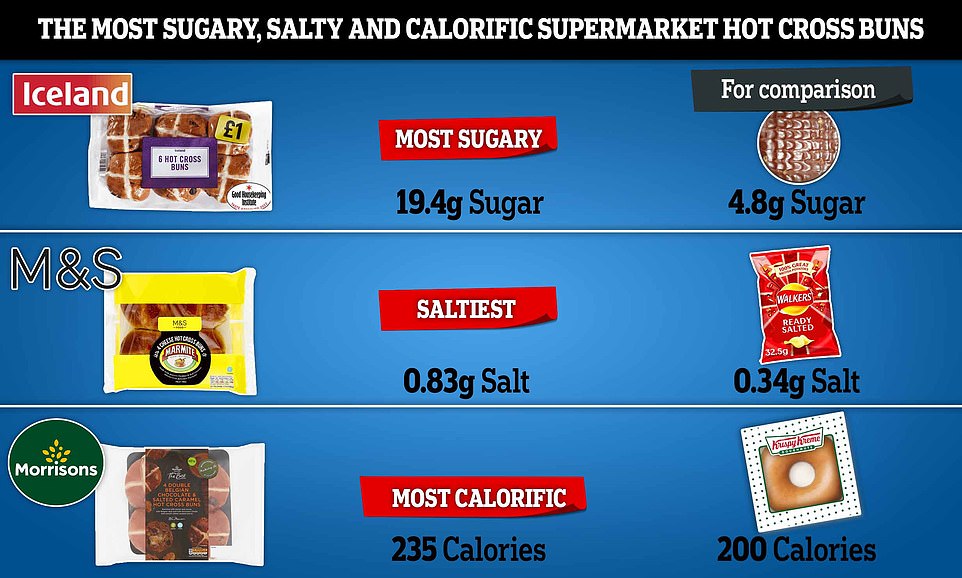 This website analysed the nutritional content of more than 60 hot cross buns on sale at Tesco, ASDA, Sainsbury’s Morrisons, ALDI, LIDL, Waitrose, M&S, Iceland and Co-op. The sweetest option contained 19.4g of sugar — the equivalent of four McVitie’s chocolate digestives, while one Easter snack had 0.83g salt, making it twice as salty as a packet of Walker’s ready salted crisps. And more than a quarter of the products had more calories than a Krispy Kreme glazed doughnut, with the most calorific containing a fifth more (235 calories)

A salt-heavy diet can raise blood pressure, increasing the risk of heart disease and stroke, while too much sugar can lead to weight gain.

Manufacturers have access to the same ingredients and know salt and sugar are harmful to health so should offer healthier products instead of adding ‘unnecessary levels’, experts claimed.

MailOnline analysis shows Morrisons’ double chocolate and caramel hot cross buns contained 235 calories — the most out of the 70 own-brand buns available from 10 of the UK’s biggest supermarkets.

Having one as a snack would account for 12 per cent of a woman’s recommended calorie intake and nine per cent of a man’s daily allowance.

Overall, more than a third (36 per cent) contained more calories than a Krispy Kreme doughnut.

The lowest calorie option — Co-op’s gluten and dairy free version, which cost £2.10 for a pack of four — contains just 139 calories per bun, 96 fewer than Morrisons’ option.

Meanwhile, Iceland’s hot cross buns — which cost £1 for a packet of six — contain 19.4g of sugar per serving.

At the other end of the scale, M&S’s Marmite cheese hot cross bun contained the least amount of sugar, with 1.7g per bun — 11 times less than the worst-offender.

Many of the products contain dried fruit, which can be packed full of natural sugar themselves. The products do not list exactly how much added sugar they contain.

The NHS states eating too much sugar can contribute to people having too many calories, which can lead to weight gain.

But the same M&S Marmite snack, which costs £1.75 for a pack of four, was the saltiest hot cross bun on sale, with 0.83g per serving — around a sixth of an adult’s daily recommended maximum intake.

ASDA’s extra fruity hot cross buns were the least salty, with just 0.21g per serving, around a quarter of the amount in the M&S product. ASDA’s version of the Easter treat costs £1.50 for a packet of four.

Katharine Jenner, a public health nutritionist at Queen Mary University of London and director at Action on Sugar and Action on Salt, told MailOnline: ‘It is absolutely baffling’ that one hot cross bun can be 11 times as sweet or four times as salty as another.

She said: ‘All manufacturers have the same ingredients available to them and know that salt and sugar are harmful to our health, so why can’t they all offer healthier options instead of products containing such high and unnecessary levels of added sugar and salt?

‘That is why mandated salt, sugar and calorie reduction targets should be implemented by the Government without further delay.’