Are you taller than 5ft9? You may be at greater risk of more than 100 health problems, biggest study of its kind finds

Tall people are at greater risk of more than 100 health problems, according to the largest study of its kind.

Researchers looked at more than 1,000 conditions among 250,000 white, Hispanic and black men and women in the US.

They found being tall was associated with a higher risk of irregular heartbeats, varicose veins, nerve damage and foot ulcers.

Tall people — defined as those 5ft 9 or above — were also more prone to skin and bone infections.

Scientists from the Rocky Mountain Regional VA Medical Centre did not look at why tall people suffer more health issues.

But one theory is that blood must be pumped a longer distance, which may cause reduce flow – essential for keeping the body healthy.

However, tall people were found to be at lower risk of some major comorbidities, including coronary heart disease, high blood pressure and high cholesterol. 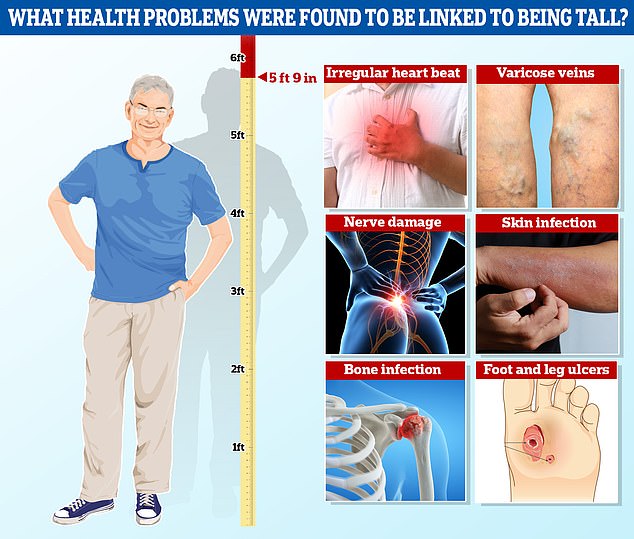 US researchers have found height could be linked to health conditions from a study of 250,000 adults with an average height of 5ft 9in

In their study the researchers found that tall people were more at risk from:

But taller people had less risk of developing:

While height has been previously linked to a variety of health conditions, scientists have been unsure if this is due to their genes or the influence of other factors like diet.

The authors of the new study now say height could be an unrecognised risk factor for several common conditions in adults, but added further work is needed to confirm their findings.

In the study, researchers used a genetic and health database called the VA Million Veteran Program which includes data from around 280,000 Americans.

In their study 91 per cent of the participants were men due to database consisting of former members of th4e armed forces.

This does means the findings may not be as relevant to other groups.

Publishing their findings in PLOS Genetics, the scientists confirmed previous research linking being tall to a higher risk of atrial fibrillation (irregular heartbeat) and varicose veins.

These included peripheral neuropathy, a condition where nerves in the body’s extremities, such as the hands, feet and arms become damaged.

One in 10 Britons suffers from this condition, which can lead to numbing, tingling and even pain in the affected areas.

In general, taller people can suffer from issues related to their limbs due to the greater physical distance they are from the body.

Other conditions the scientists found new links to height included an increased risk of bone infections and leg and foot ulcers.

Lead author of the study Dr Sridharan Raghavan told MailOnline that in total they identified between 100-110 distinct health conditions linked to being tall.

He added: ‘We conclude that height may be an unrecognised non-modifiable risk factor for several common conditions in adults.’

The researchers did not quantify what the increased risk was per condition.

A person’s height is determined by a variety of factors, these include their genetics which can give them a predisposition to being tall or short.

But lifestyle also plays a part with children who have a healthier diet and who are from a wealthy background more likely to grow tall.

The average British man clocks in about 5ft 9in and the average woman 5ft 3in.