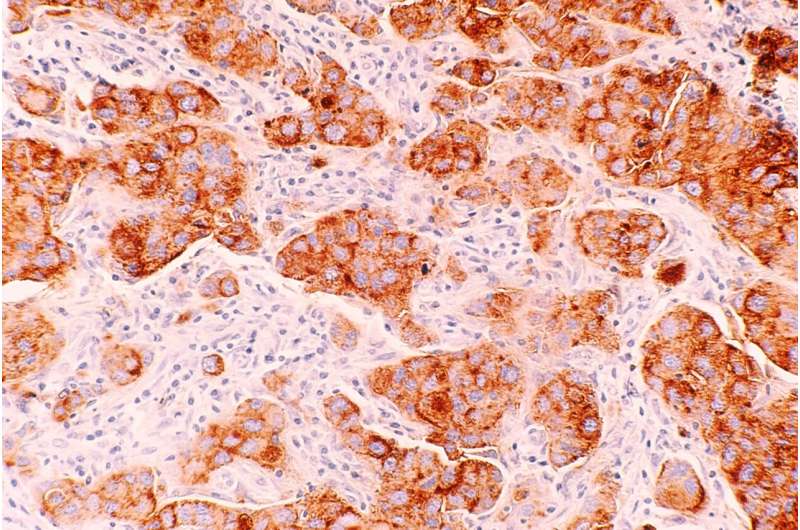 Patients with a type of breast cancer called HER2-positive are less likely to survive if their initial treatment fails to eradicate the tumor completely and they have high levels of immune cells called tumor infiltrating lymphocytes in the residual disease.

Dr. Federica Miglietta told the 13th European Breast Cancer Conference that normally tumor infiltrating lymphocytes (TILs) help the body’s immune system to fight cancer cells. However, for this particular breast cancer, which is driven by human epidermal growth factor 2 (HER2) receptors on the surface of the cancer cells, post-treatment TILs seemed to be counter-productive if any disease remained after patients had received chemotherapy and anti-HER2 therapy before surgery (known as “neoadjuvant treatment”).

“In patients with HER2-positive breast cancer undergoing neoadjuvant treatment, higher levels of tumor infiltrating lymphocytes when patients are first diagnosed are known to be associated with a greater likelihood of the cancer disappearing from the breast and the axillary lymph nodes and with improved survival,” said Dr. Miglietta, who is a research fellow at the University of Padua and a medical oncologist at the Istituto Oncologico Veneto, Italy. “However, there have been conflicting data on the role of TILs in patients who still have residual disease after neoadjuvant treatment.”

Cancer researchers have become increasingly interested in the role of the immune system in cancer and ways to harness it to fight the disease. Therefore, Dr. Miglietta and her colleagues looked at data from 295 HER2-positive breast cancer patients who had been treated at three Italian centers between 2001 and 2021: Istituto Oncologico Veneto, Azienda Unità Sanitaria Locale di Reggio Emilia and IRCCS Humanitas Research Hospital—Humanitas Cancer Center. Sixty-six percent of patients (195) had residual disease after neoadjuvant treatment. Information on the amount of residual disease (“residual cancer burden”) and TILs in the residual tumors was available for 180 and 159 patients, respectively.

“We evaluated the levels of TILs in surgical samples of residual disease after neoadjuvant treatment and also assessed their prognostic role,” said Dr. Miglietta. “We found that overall survival for patients with HER2-positive breast cancer, who had TILs on more than 15% of the surface area of their tumor, was significantly shorter than patients with lower levels of TILs.”

“We know that the tumor is surrounded by the so-called tumor microenvironment, like a complex ecosystem where tumor cells and the patient’s normal cells, including immune cells, affect and shape one another. Our results suggest that the immune microenvironment of residual disease, after exposure to chemotherapy and anti-HER2-targeted therapy, promotes the growth of cancer cells rather than fighting against them, and this phenomenon seems to profoundly affect the natural history of the disease,” said Dr. Miglietta.

“The fact that higher levels of TILs in residual disease is associated with worse outcomes seems to be a distinct feature of HER2-positive cancer. Indeed, the opposite has been consistently reported for triple negative breast cancer. This suggests that the behavior of the residual disease immune microenvironment is highly dynamic and is strictly related to breast cancer type and exposure to treatment.”

The researchers used the information on TILs, residual disease burden (“residual cancer burden”) and patient outcomes to develop a prognostic model for reliably predicting the probability of overall survival.

“This provides a more accurate tool to stratify patients properly from a prognostic point of view so that we can know how the disease is likely to evolve and this information can be potentially used, if validated, to plan treatments accordingly following neoadjuvant therapy and surgery. Our new prognostic model is associated with overall survival, which represents one of the most reliable and clinically relevant pieces of information for cancer patients and their doctors,” she said.

If the prognostic model is validated by further studies, it could not only improve predictions of outcomes for patients with HER2-positive breast cancer where neoadjuvant treatment has failed to completely eradicate cancer cells, but it could also be used to redefine objectives for new clinical trials of neoadjuvant therapies and to identify patients suitable for other treatments when the neoadjuvant treatments are ineffective.

The researchers are planning a more comprehensive evaluation of the composition of TILs, an analysis of gene expression to identify genomic differences that are associated with the levels of TILs and their composition after neoadjuvant treatment, and a validation of their results in larger, prospective studies.

President of the European Breast Cancer Council, Professor David Cameron, from the University of Edinburgh Cancer Research Center, UK, represents the Council at EBCC13 and was not involved with the research. He commented, “The role of the immune system in cancer has been interesting us for some time. We have seen that some cancers respond well to drugs, such as checkpoint inhibitors, that help the immune system to recognize and kill cancer cells. In HER2-positive breast cancer, it appeared that higher levels of tumor infiltrating lymphocytes predicted better responses and outcomes in patients. But, until now, people had not really looked at cancer that has not been cleared by treatment. This study suggests that TILs in the residual disease are not good news.