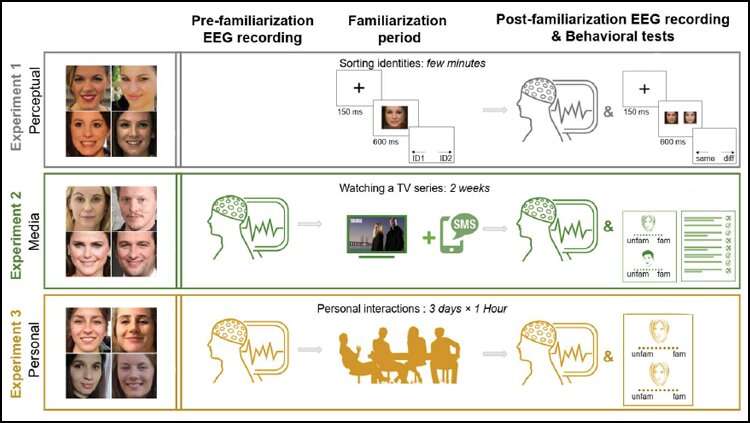 The neural representation of a familiar face strengthens faster when you see someone in person, according to a new study published in JNeurosci.

The brain loves faces—there’s even an interconnected network of brain areas dedicated to face-processing. Despite all the research on how the brain sees faces, little is known about how the neural representation of a face changes as it becomes familiar.

To track how familiarity brain signals change, Ambrus et al. measured participants’ brain activity with EEG before and after getting to know different faces. Participants were exposed to faces in one of three ways: perceptual exposure (a sorting game), media exposure (watching a TV show), and in-person (chatting with lab members). A jolt of brain activity appeared on the EEG around 400 milliseconds after viewing a face; the strength of the signal was tied to the familiarity of the face. The type of exposure affected how much the signal changed: in-person exposure strengthened it the most, followed by media exposure. Perceptual exposure had very little impact on the familiarity signal.