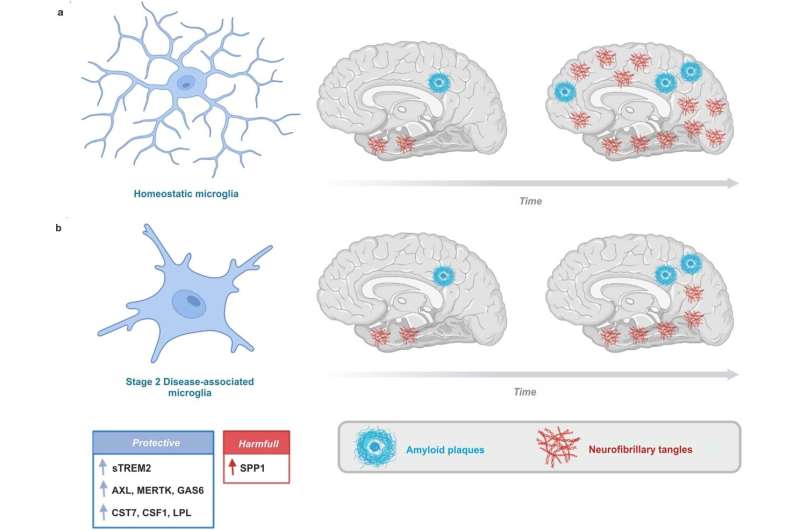 The brain’s big-eating immune cells can slow down the progression of Alzheimer’s disease. This is shown by a study that is now published in Nature Aging.

The brain’s own immune cells are called microglia and are found in the central nervous system. They are big eaters that kill viruses, damaged cells and infectious agents they come across. It has long been known that microglial cells can be activated in different ways in several neurological diseases such as Alzheimer’s and Parkinson’s diseases. Depending on how they are activated, they can both drive and slow disease development. Researchers from Lund University and Karolinska Institutet have now shown that a certain type of activation of the microglial cells triggers inflammatory protective mechanisms in the immune system.

“Most people probably think that inflammation in the brain is something bad and that you should inhibit the inflammatory system in case of illness. But inflammation doesn’t just have to be negative,” says Joana B. Pereira, researcher at Lund University and Karolinska Institutet who is first author of the study.

One of the proteins that sits on the surface of microglial cells is TREM2. When an unusual mutation occurs in this protein, the risk of developing Alzheimer’s increases. However, when the protein is activated, it can instead be protective. Namely, the TREM2 receptor seems to sense residual products of disintegrating cells in the brain, causing it to be triggered. When TREM2 is activated in people with Alzheimer’s, the researchers have found that less of the thread-like structures formed by the protein tau accumulate in the brain cells.

“This in turn means that the development of the disease is slower and the deterioration of the patient’s cognitive abilities is slowed down,” says Oskar Hansson, professor of neurology at Lund University and senior physician at Skåne University Hospital.

In some animal studies, it has been previously observed that microglial cells can eat tau proteins and thus clean up what is abnormal in the brain. Oskar Hansson believes that this could be behind what is also happening in this research study, which is conducted in humans. Oskar Hansson also thinks that the results of the study are particularly interesting, given that several pharmaceutical companies are now developing antibodies that can activate TREM2 in particular, and he hopes for a future treatment method for Alzheimer’s disease.

“In addition to trying to find therapies to reduce the proteins beta-amyloid and tau, I see this as a third treatment principle. Perhaps in the future patients can receive a cocktail of drugs that, in addition to reducing beta-amyloid, also boost TREM2 antibodies and thus slow down the course of the disease,” concludes Oskar Hansson.