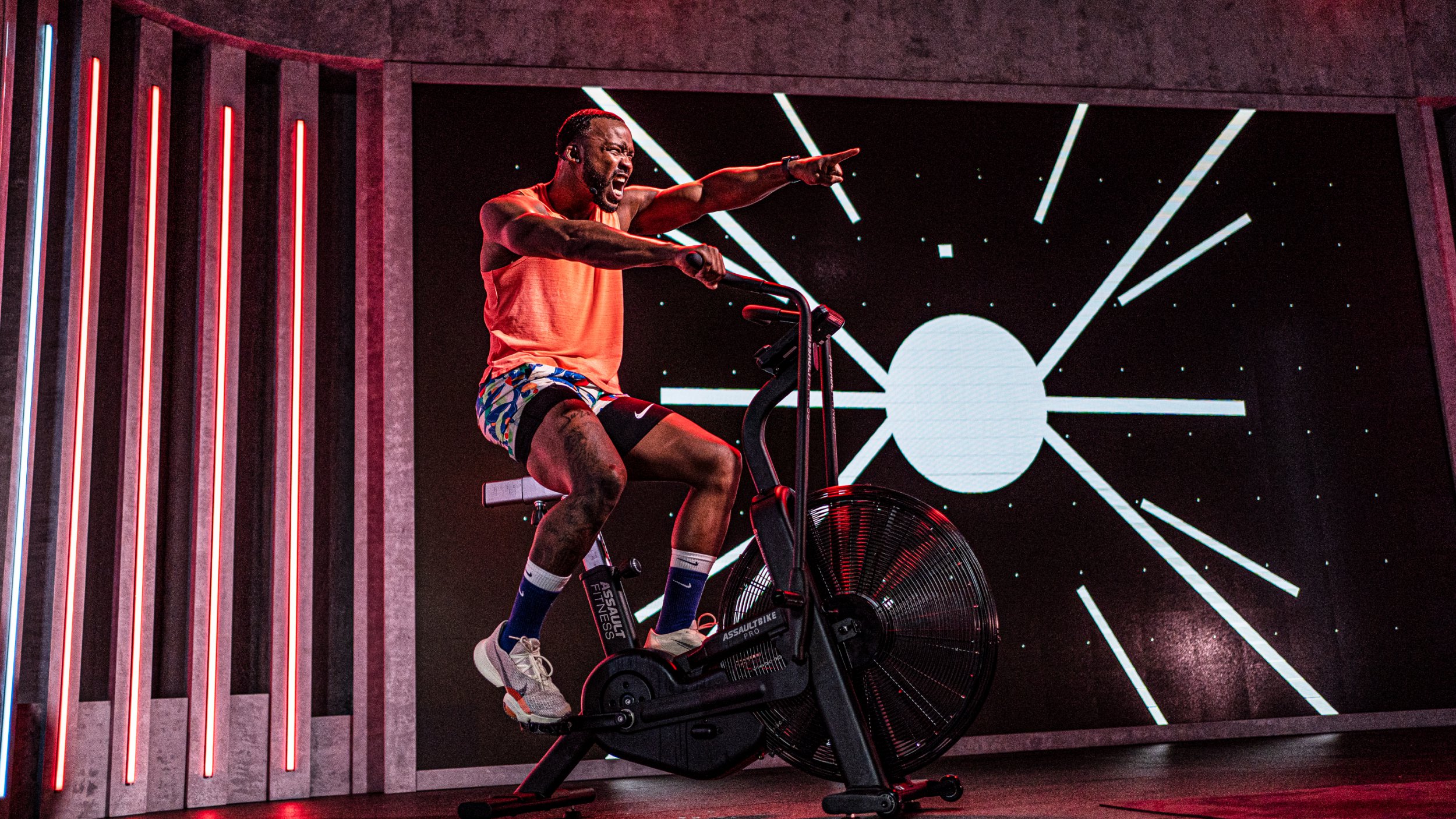 Until recently, uttering the words ‘fitness’ and ‘video games’ in the same sentence would have raised a few eyebrows, but over the last few years we’ve seen a wonderful fusion of these two worlds.

While gaming consoles have been launching titles incorporating physical activity for a while now, fitness brands have only really just begun to gamify their platforms and integrate this tech into their workouts, adding gaming elements designed to help to boost motivation.

From in-class connected heart-rate trackers to on-demand fitness platforms with live leaderboards and virtual reality (VR) environments, this ‘gamifying’ of fitness has only been made possible thanks to cutting-edge innovation.

‘Just like video games, fitness in tech platforms like VR are fun, immersive, and challenging. There’s a range of experiences on apps that bring people together and empower positive change,’ says Jason Rubin, vice president of Metaverse content at Meta.

‘And while many consumers have been returning to in-person gyms, it’s likely that the pandemic’s influence on gaming and exercise will be long-lasting.’

So what can we expect to see as this world intensifies?

As one of the biggest players in the home gym space, Peloton is leading the way in the gamification of fitness with its recently launched innovation: Lanebreak.

Available on the Peloton Bike or Bike+, Lanebreak is the fit-tech giant’s first foray into gaming and brings about immersive cycling that could best be described as the birth child of Guitar Hero, Mario Kart, and Tron.

While you pedal for your life in the real world, the built-in display has you speeding down a virtual racetrack, earning points and dashing through different challenges in an experience that combines gaming, music, and a sweaty cardio workout.

It’s a whole new way of experiencing Peloton, and a refreshing change if you’re yearning for something different to your standard coach-led spin class.

The AssaultBike is the most efficient yet gruelling cardio machine you can sit your bum on. Using almost every muscle in the body, this pimped-up exercise bike is loved by elite athletes and fitness enthusiasts alike.

It’s no wonder, then, that one of the biggest and smartest home fitness platforms, Fiit, was keen to bring on board this epic bit of workout kit as the firm’s first attempt at providing an interactive, at-home experience with real-world fitness equipment.

Syncing up with the platform, it delivers a gamified experience through live stats and rep count-tracking that are beamed directly to a live leaderboard making it, essentially, the Peloton of the HIIT world.

With three different class types of Sprint, Metcon, and Endure – each being either 10/25/40-mins in length – members can target all three energy systems to support in building them into the ultimate athlete.

If you never imagined playing video games could be healthy, get a load of this: the world’s first immersive fitness gaming console.

Called Quell, this health-inspiring console consists of an immersive gaming platform and special wearable that couldn’t be further than your average smartwatch.

Connected to a TV or PC, it uses real resistance, powerful haptics, and immersive gameplay to deliver gym-quality exercise to fitness-hungry people at home.

Made up of game controllers, a chest unit, belt, wrist wraps and resistance bands, the Quell wearable syncs players’ movements to on-screen avatars, while also tracking their speed, accuracy, endurance, and power.

The controllers take advantage of an accelerometer and gyrometer sensors, tracking physical progress to keep tabs on their fitness as they exercise through the levels and get fit without feeling like it’s a chore.

French fitness outfit Les Mills, who brought you commercial gym class favourites such as Bodypump, isn’t planning to be left in the dust of cutting-edge fit-tech innovators. And so the company is bringing exercise motivation to the metaverse with the launch of its Bodycombat VR app.

This is a platform that fuses globally-renowned trainers in virtual environments for an out-of-this-world fitness gaming experience on the Meta Quest VR platform.

Led by some of the Bodycombat class’ already very popular trainers, the game pits players against martial arts challenges across a variety of levels, spanning intergalactic deserts and neo-city skylines.

Players then earn points for their effort and technique, with the trainers providing coaching cues and motivation to power them through the workouts.

Combining weight lifting and video gameplay – a concept that’s unique to the usual HIIT-based online workouts – this platform is all about tapping into the growing demand for gamified and entertainment-led exercise.

Designed for at-home use, the snazzy system sits on top of any kind of display – be it a TV or a PC monitor – and is made up of a Saed console, base and a set of connected dumbbells.

Spin your way around the world with this Quest 2 app, which lets you virtually cycle through up to 10 million miles of Google Street View content while tracking your own stats and progress.

Connects to most smart trainers and static smart bikes for a super realistic experience.

Fitness isn’t just about sweating and muscle building, mindfulness and mental health are just as important. So give Hoame a try: the world’s first virtual meditation studio. With over 15 styles of meditation, you can tap into the power of a real boutique meditation studio from anywhere.

Feel the exhilaration of extreme free solo climbing with this app that lets you ascend to epic heights – from city skyscrapers to nature’s greatest peaks – all without ropes (and the real-life dangers of falling).

To spice things up, compete with friends and conquer leaderboards in asynchronous multiplayer modes.

Hit the slopes and experience realistic arcade snowboarding (in the warmth of your home) with Carve, which will get you moving while thinking you’re an extreme sports legend.

Unlock new boards, gloves, and even mixtapes so you can explore the mountain in style, all while working up a sweat.

Alongside this, onboard software powers a smart, AI-powered motion tracking camera that uses movement recognition that’s able to track the velocity, acceleration and position of the users as well as Staedium’s connected, adjustable dumbbells.

The result? A smart virtual personal training system that can recognise and correct form, give tips, and count how many clean reps you’ve managed to pull off per set. A more fun way to train that will ensure you don’t get distracted during rest periods.

Boutique fitness platform TRIB3 has just recently joined forces with fitness Metaverse platform OliveX on a quest to shake up the traditional fitness market by being the first gym brand to launch in The Sandbox (a virtual community where players can build, own, and monetise their gaming experiences).

Using blockchain tech – a structure that stores transactional records in a way that’s impossible to change back – OliveX is all about encouraging people to be more active through the gamification of exercise in virtual environments.

The new partnership sees TRIB3’s HIIT workouts delivered in this digital world, allowing users of The Sandbox to virtually experience group fitness classes in the Metaverse.

They’ll also be able to use their mobiles to track exercise while playing other games within the OliveX platform, storing workout data that they can then exchange for rewards using the platform’s own cryptocurrency (called DOSE) to buy items in the metaverse such as apparel, music, and NFTs.