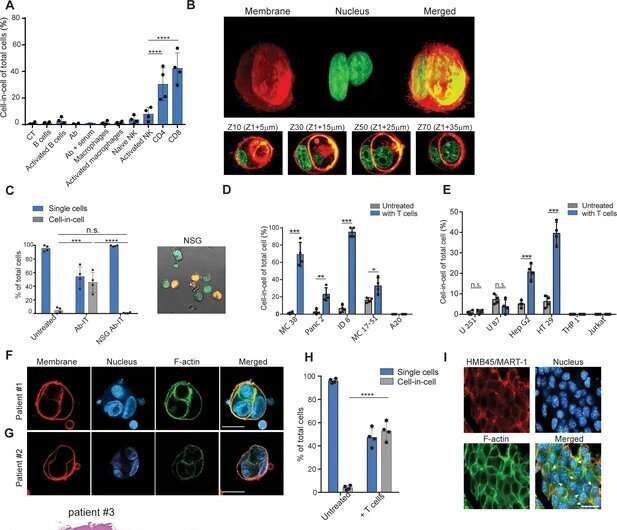 Scientists have shown how tumor cells evade immunotherapy by generating unique, temporary cell-in-cell structures, where the inner cells remain in tact and can return to single tumor cells.

These findings, published today in eLife, provide a novel theory as to how tumor cells avoid destruction by the immune system. They could also inform the development of treatments that combine immunotherapy with the timed inhibition of relevant signaling pathways in tumor cells.

“Cancer immunotherapy harnesses the body’s immune system to fight cancer. Despite its remarkable success, the majority of patients who receive immunotherapy will only see their tumors shrink in size temporarily before returning, and these relapsed tumors will likely be resistant to immunotherapy treatment,” says first author Amit Gutwillig, who was a Ph.D. student at the Carmi Lab, Tel Aviv University, Israel, at the time the study was carried out, and is now a Senior Researcher at Nucleai, Tel Aviv.

To identify how tumors relapse after immunotherapy, Carmi and the team began by comparing the genetic sequences of whole genomes in primary and relapsed tumors in the same patient. Their analysis suggested that relapsed tumors do not change dramatically following immunotherapy.

Next, the team studied this process in breast cancer and melanoma, using mouse models in which immunotherapy-resistant tumors had relapsed. They administered the mice with cells from treated tumors and allowed these cells to reach a palpable size. The team found that the cells were equally susceptible to the same immunotherapy approach as the parent tumor, although they relapsed sooner.

To better characterize the tumor cells that survived in mice following immunotherapy, the researchers isolated and studied the live tumor cells. They found that most of the cells responded to the presence of T cells—a type of immune cell that targets foreign particles—by organizing into temporary formations. These were made up of clusters of several tumor cell nuclei, which are surrounded by a single, multilayered membrane and a meshwork of cortical actin filaments. The inner cell of the formation was dense and appeared to be compacted within another cell.

To show that this result was not due to the isolation of the melanoma cells, the team also analyzed tumors with fluorescently labeled cell nuclei and membranes. They found that the cell-in-cell formation was more prevalent in immunotherapy-treated tumors, particularly in sites associated with tumor cell death. Further analysis indicated that roughly half of the tumor cells that survived immunotherapy were arranged in the cell-in-cell formation. Over time, these cells returned to a single-cell state, with similar structural features to those of the parental cell line.

The team next tested whether this phenomenon occurs in human cancers. To do this, they incubated tumor cell lines with pre-activated T cells from healthy donors. They discovered that the vast majority of breast, colon and melanoma tumor cells that survived T-cell killing organized into the cell-in-cell structure. A three-day observation of T cells interacting with tumor cells showed that these structures were dynamic, with individual tumor cells constantly forming and disseminating from the structure.

Finally, they tested the clinical relevance of this discovery by analyzing cancerous tissues from multiple organs of four stage 4 melanoma patients. These patients were undergoing surgical removal of primary and metastatic lymph nodes—that is, lymph nodes that had spread from the primary tumor. The researchers found that in all four patients, the cell-in-cell formation was highly abundant in the T-cell zone of the draining lymph nodes, but not in the primary tumors. Furthermore, in a patient with untreated recurrent melanoma, most of the cells in the primary tumor were single cells, whereas the recurrent tumors had an abundance of the cell-in-cell formations.