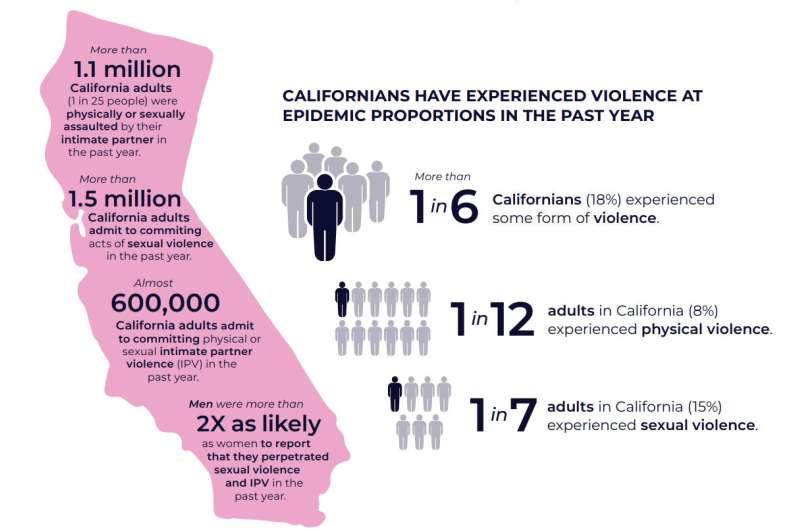 Violence is on the rise in California, with significant increases observed during the COVID-19 pandemic, according to the latest annual report from the California Study on Violence Experiences across the Lifespan (CalVEX). Led by researchers at University of California San Diego School of Medicine, CalVEX is the nation’s only multi-year statewide assessment of violent experiences.

The findings, shared in a public report on September 8, 2022, reveal that more than one in six Californians (18 percent) experienced physical or sexual violence in the past year, and one in every 25 Californians experienced intimate partner violence. Rates of both physical and sexual violence have increased since the start of the pandemic, with physical violence nearly doubling for men from 2020 to 2022. Further demographic disparities highlight potential contributing factors that may have been exacerbated by the pandemic.

The majority of victims never formally report these experiences, so researchers say relying on criminal justice data or health records to examine the state of violence often fails to capture the true breadth of abuses. Instead, CalVEX surveys a representative sample of adults across the state and uses their responses to estimate population rates. Data in the latest report were collected in March 2022 from 2,285 adults.

Women also showed greater mental health impacts and life disruptions due to violent experiences, with 82 percent of women reporting anxiety or depression as a result of physically aggressive, coercive or forced sexual behavior. Women who reported physical violence were also twice as likely as men to miss work or school as well as change or quit a job.

Socially and economically vulnerable Californians—including Latino and Black communities, LGBTQ communities, people with a history of homelessness or incarceration, and people living with a disability—also faced disproportionate levels of violence. Experiences of financial distress, including eviction and food or housing insecurity, were associated with a two to eight times increased risk of violence.

“Our findings suggest the rising rates of violence are linked to the harsher social climate, economic insecurity, and poorer physical and mental health that many Californians have experienced over the last few years due to the pandemic,” said Raj.

The researchers advocate for new policies that strengthen social and economic safety nets, programs in violence prevention, and mental health services across the state. Such a multi-level approach, Raj says, would not only address the current violence crisis, but also support post-pandemic rebuilding and make the state more resilient to other health, environmental and socioeconomic stressors to come.