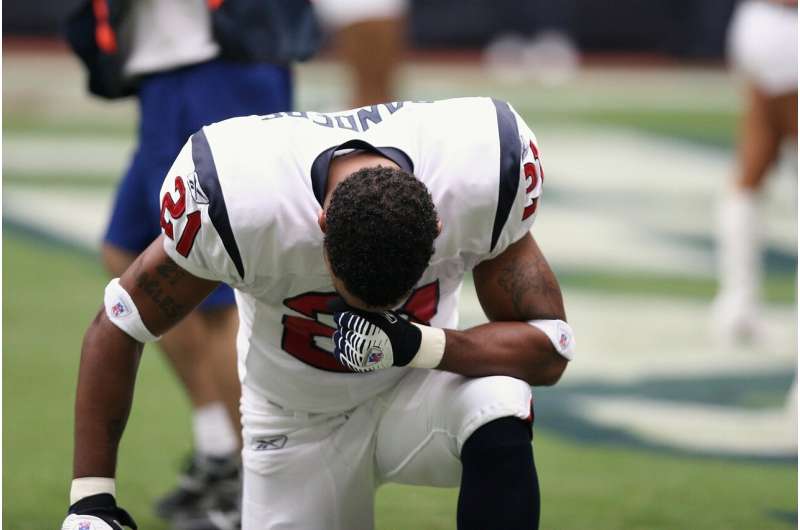 Health experts who reviewed the revised COVID-19 protocols jointly agreed to by the NFL and NFL Players Association held mixed reactions about whether the policy shift represents a progression as the league continues to contend with the ever-evolving pandemic.

On one hand, the revision could present a practical approach to spiking cases as fatigue over testing and preventative measures continues to set in, experts say. On the other, the revised protocols could also have notable blind spots that could lead to significant unintended outcomes, most notably, asymptomatic transmission and the pitfalls of complacency.

No matter the opinion, however, certain caveats remain. As the omicron variant continues to spread throughout the country, accounting for 73% of new cases last week, CDC data revealed, vaccine booster doses and masking remain essential in combating transmission.

“I think this new guidance moves us one step forward in terms of trying to adjust our response to COVID-19, overall,” Dr. Wafaa El-Sadr, professor at Columbia University’s Mailman School of Public Health and the co-founder and director of ICAP, a public health initiative at Columbia, told USA TODAY Sports. “There’s a realization that testing and testing and testing of more people who don’t have symptoms is not the way to go. It’s going to be practically impossible to identify every single person who is infected and asymptomatic. It’s just not feasible as we anticipate this virus becoming more endemic in our communities.

“What’s critical is moving toward a population that is not only vaccinated, but boosted. Then we can use testing in a more targeted approach. This is most likely the way to get the most out of testing, rather than testing everybody who is completely asymptomatic with the goal of identifying every asymptomatic individual who is infected.”

Yet, Dr. Ogbonnaya Omenka, assistant professor at Butler University’s College of Pharmacy and Health Sciences, thinks that disparities in testing frequency between the vaccinated and unvaccinated player population could prompt outbreaks. The NFL may already be experiencing this after 51 players landed on the COVID-19 list on Monday alone.

“With this approach, you have unintentionally skewed the outcome,” Omenka told USA TODAY Sports. “You are more likely to make sure that the unvaccinated don’t have any infections in the building and you’re actually more likely to have an asymptomatic person in the vaccinated population that you may not catch because you’re not testing them every day.

“If you’re just saying, ‘Let’s just test the unvaccinated every day because that’s the easy, low-hanging fruit,’ well, we know the vaccinated can still be infected. They may actually use the vaccinated unintentionally to support the transmission of infections.”

The NFL said it arrived at these revised protocols after consulting with doctors and infectious disease experts on both of the NFL and NFLPA staffs, as well as outside advisors. Essentially, the biggest change is a shift away from a surveillance-based testing model for vaccinated players to one that instead targets players who are exhibiting symptoms.

“I would not describe it as we are stopping testing, or we are doing less testing,” NFL chief medical officer Dr. Allen Sills said Saturday in a conference call with reporters. “I would simply say that we are trying to test smarter and test in a more strategic fashion.”

Under the revised protocols, all vaccinated players will no longer be tested on a weekly basis. Instead, players will be screened for symptoms and players are required to self-report any symptoms consistent with a COVID-19 infection. Any symptomatic player will then be tested immediately and a positive test result would trigger that player entering the COVID-19 protocol.

The NFL will also conduct targeted spot testing for fully vaccinated players. These tests will be run through IQUIVA, a third-party data science partner jointly appointed by the NFL and the union, that will input data into its system to determine where spot testing should take place. The testing samples will factor in position and coaching staff groups to account for close contacts.

Unvaccinated players will continue to face daily testing, masking and social distancing policies that had been set forth in previous versions of the player health and safety protocols.

“We tend to forget we’re dealing with humans,” Omenka said. “When we say, ‘targeted testing’—even if it’s not the population reading this document—we need to make sure the ‘targeted’ don’t feel ‘targeted,’ if that makes sense. If, within a given setting, you design a testing approach that has notable disparities, such as in testing, you are leaving room for psychological blind spots where somebody can start feeling these negative associations.”

El-Sadr’s main criticism of the NFL’s revised policy was its handling of language surrounding booster doses. She suggested “strongly recommending or mandating” a booster dose for players and staffers and said that the entire country should begin thinking about the definition of “fully vaccinated” as having had a booster dose.

The NFL, for its part, has been encouraging players to get information on and receive booster doses. The NFLPA has been doing the same. Still, the league has not provided any data on how many players have received booster doses.

The strength of the revised protocols falls on the shared responsibility of players and staff to self-report symptoms and take the proper measures. When breakdowns have happened in the past, players have faced discipline—such as when Buccaneers receiver Antonio Brown was found to be one of three players who “misrepresented” their vaccination status or when Packers quarterback Aaron Rodgers was fined in November for violating protocols.

Keeping in line with that, NFL spokesman Brian McCarthy told USA TODAY Sports “there’s the potential” for discipline if a player is found to have knowingly concealed symptoms under the revised protocols.

What could complicate that, however, is the magnitude of these late-season games as players and teams gear up for playoff pushes and individual awards. Theoretically, a key contributor on a team could feel external pressure to be available for big games, especially in the playoffs.

“For the same reason that a patient who is on their sickbed may not reveal everything to a physician, that tells you the depth of this human flaw, if you may,” Omenka said. “It’s unfair, actually, to expect that the well-being of a population should be based on the goodwill and vulnerability of individuals. We shouldn’t base public policy on the tendency of individuals to be vulnerable.”

The difficulty in assessing this part of the NFL’s revised protocols is that individuals are just that. They’re inherently different and act by different codes of ethics and models of behavior.

An expert in infectious diseases and public health whose work was critical in the response to the HIV/AIDS epidemic, El-Sadr said education, awareness and offering an avenue for empowerment are keys to ensure there are no breakdowns in self-reporting.

“I find that people, if given the option of making the responsible choice, most will take you up on that,” she said. “But there will be some who will be irresponsible. It’s about creating a package that will motivate people to make the right choices.”

It is worth noting that the NFL’s response to the recent spikes in cases differs from that of some of the other major sports leagues in the country. The NBA has postponed several games. The NHL and its players’ association agreed to pause its season two days before an originally-scheduled holiday break was scheduled. Several men’s college basketball games have been postponed or canceled.

While the NFL did push back three games in Week 15, the postponements were only for a few days. That left some teams—like the Cleveland Browns in their 16-14 loss Monday against the Raiders—down to third-stringers at a handful of key positions like quarterback. The Washington Football Team will be without seven coaches for Tuesday night’s game against the Philadelphia Eagles due to COVID-19 protocols.

Both experts agreed that, like everyone in society, it would be beneficial for NFL players and staffers to remain adaptable to protocols and mandates as conditions evolve.

In Omenka’s view, language and messaging of how policy is crafted and delivered must be given special attention. In essence, that messaging becomes just one part of the methodology in the protocol.

But regardless of where the NFL comes out of the omicron variant and any other that may follow, El-Sadr called on the NFL to be transparent and open with its findings under these revised protocols.