Modern medical science has progressed significantly since the beginning of the 20th century. In recent years, highly targeted drug therapies have been developed which have varying degrees of success. 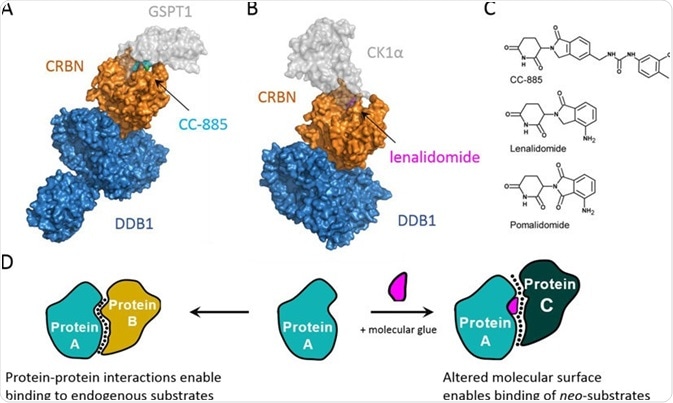 However, targeting specific diseases can prove to be difficult. By creating molecular “glues” researchers hope to provide improvements in the treatment of multiple conditions. This article will provide a brief discussion of their use.

A glue binds together two surfaces. Molecular glues, as the name suggests, bind together structures at the molecular level by changing the surface of the target molecule, allowing it to attach to another protein. They were first discovered in plants such as Arabidopsis thaliana, performing such functions as hormone production and antibiotic defense mechanisms. However, they are found in a wide variety of biological systems, performing several critical functions for the organism.

Molecular glues are a very recent development in medical science, providing new ways of treating a disease which current therapeutics cannot. By binding to specific proteins in the cell they provide highly specific drug therapy options that are used by researchers in biomedical research as well as novel approaches in related fields.

Proteins are responsible for most functional interactions within cells. These include signaling pathways, transcription of genetic information, apoptosis, and enzyme production. However, these proteins can sometimes go rogue, leading to cancer, neurodegenerative conditions, and autoimmune diseases.

Proteins are like workers on a production line. They do not operate in isolation but need each other to function properly. Physical interactions between them allow them to carry out their duties within the cell. However, if a single protein either functions inadequately or too well, this can lead to disease.

Some current therapies work by binding these disease-related proteins to drugs that can correct their function. However, this approach can have varying degrees of success, and sometimes diseased cells can bypass this treatment completely, rendering it ineffective.

Molecular glues can be used to either create a complex of proteins that is more stable by attaching them, giving them better functionality by gluing a diseased protein to a “regulator” protein. As they are highly selective, there are also fewer side-effects.

Breast cancer is a major killer – the World Health Organization estimated that it killed 627,000 women worldwide in 2018 and is also a killer of men. Molecular glues have great potential for certain types of resistant breast cancer. Current drugs in use target Estrogen Receptor α, an over-active receptor in these cancers, and attempt to block its activity directly.

However, this is not always effective. A paper published in 2019 by Eline Sijbesma and their team proposed stabilizing this receptor with a regulator protein by using a molecular glue to bind the two together, tightly trapping the receptor and thus inactivating it. This research could have the potential for the treatment of other types of cancer as well.

This treatment is not just useful for cancer. Several other degenerative and potentially fatal conditions exist which are caused by either the over or under-expression of proteins within cells. This includes cystic fibrosis, diabetes, inflammation, and several types of neurodegenerative disease.

The use of molecular glues could lead to several novel approaches in targeted and highly specific drug therapies for these conditions, giving hope to millions of patients worldwide.

Whilst some diseases can be treated in the way mentioned above, sometimes diseased proteins and cells need to be removed from the body to assist in recovery. Molecular glues can aid in this process by hijacking the body’s own natural garbage disposal systems.

In a process called targeted protein degradation, the proteasome is co-opted, which then recycles troublesome proteins, destroying them completely. This approach is especially useful for targeting transcription factors, a previously undruggable class of proteins related to cancer.

This garbage disposal process in the cell functions by binding a protein to a molecule known as ubiquitin. The process of binding to this molecule is known as ubiquitination. As not all proteins can be attached to ubiquitin, the use of molecular glues can aid in this process. They can either attach to the protein directly or to an enzyme known as E3 Ligase. Both approaches then allow ubiquitin to attach to the target protein, thus allowing it to be disposed of efficiently.

Another recent focus of research into molecular glues is their use in creating ordered, functional nanostructures that are useful in both biotechnology and nanotechnology. There are many molecular “bricks” including oligonucleotides and proteins that exist in nature which can assemble spontaneously into complex structures such as DNA origami with peculiar properties.

Recent studies have also investigated the application of molecular glues in molecular print boards and how the use of these glues can achieve more efficient reversible attachment of nanomolecular structures to them.

Molecular glues are still a very recent discovery. However, the research is providing exciting possibilities for drug discovery which can benefit the treatment of a plethora of diseases. As further studies are carried out, there is the possibility of a paradigm shift in medical science as well as several important related fields.

Reg Davey is a freelance copywriter and editor based in Nottingham in the United Kingdom. Writing for News Medical represents the coming together of various interests and fields he has been interested and involved in over the years, including Microbiology, Biomedical Sciences, and Environmental Science.