B-Raf is a protein encoded by the BRAF gene and is involved in the RAS/MAPK pathway, which regulates cellular growth and division. RAF genes encode serine and threonine kinase proteins downstream of Ras in the pathway. 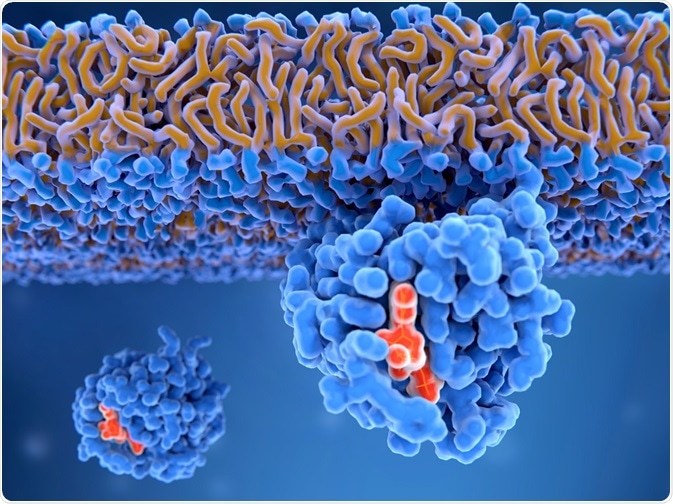 There are three human RAF genes: ARAF, CRAF-1, and BRAF. BRAF encodes the B-Raf protein, which is involved in signal transduction inside cells. It catalyzes phosphorylation of serine and threonine on target proteins, converting adenosine triphosphate (ATP) to adenosine diphosphate (ADP). B-Raf is activated through binding Ras-GTP.

Point mutations of BRAF, are present in over 60 percent of melanomas and have been found at lower rates in lung, colon, and ovarian carcinomas. The B-Raf gene has two hotspots for mutation. One is in the activation segment of the kinase domain. 89 percent of mutations are in that zone. The other hotspot is the glycine-rich loop of the kinase domain. That area accounts for 11 percent of mutations. Mutant B-Raf proteins that have been implicated in tumorigenesis often have elevated kinase activity, known as a gain of function mutaion.

The B-Raf protein has 766 amino acids in three conserved domains. Conserved region 1 (CR1) is a Ras-GTP-binding self-regulatory domain. Conserved region 2 (CR2) is a serine-rich region that functions as a hinge on the molecule. Conserved region 3 (CR3) is a catalytic protein kinase domain. It phosphorylates a specific sequence on protein targets.

In addition to autoinhibition, CR3 is also inhibited when the protein is not post-translationally phosphorylated at certain serine and tyrosine residues in the CR2 hinge region. In order to become active, the CR3 kinase domain must be converted to its active form by phosphorylation of the activation loop. This changes its conformation, revealing the ATP binding site and enabling enzymatic activity.

Mutations of the BRAF gene can cause certain inherited diseases and birth defects. Those include cardiofaciocutaneous syndrome, whose symptoms include heart problems, mental retardation, and changes to facial features.

These mutations can also cause cancer, making BRAF an oncogene. BRAF mutations have been associated with many cancers, including:

There are over 30 mutations of BRAF that have been connected to cancer. BRAF mutations are found in more than 80 percent of melanomas, but only 1-3 percent of lung cancers. The most common BRAF mutation leading to cancer is substitution of adenine for thymine at nucleotide 1799. That mutation has been found in papillary thyroid carcinoma, colorectal cancer, melanoma, and non-small cell lung cancer.

Some pharmaceutical companies are developing inhibitors of B-Raf protein as anticancer therapies. One of these showed increased survival in metastatic melanoma and was licensed for treatment.