Dr Doom strikes again… but this time it’s not about Covid! Chris Whitty claims air pollution is as dangerous as pandemic virus and encourages parents to scold motorists idling outside schools

People should have ‘the courage’ to tell off motorists who leave their engines running outside schools, Chris Whitty, the Chief Medical Officer said yesterday.

Professor Whitty said air pollution was causing between 26,000 and 38,000 deaths a year in England alone, with more across the UK as a whole.

In his annual report on the nation’s health, Professor Whitty said he has targeted air pollution as it is as significant a health risk as the Covid-19 virus.

He said the public need to be ‘nudged’ into action to change their behaviour to stop toxic dust and gases. 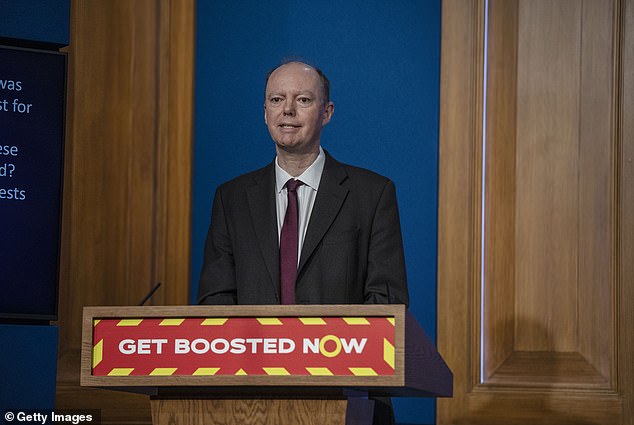 People should have ‘the courage’ to tell off motorists who leave their engines running outside schools, Chris Whitty, the Chief Medical Officer said yesterday 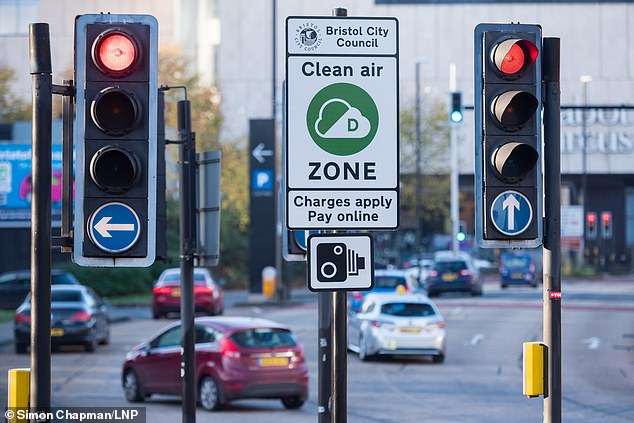 Pictured: Bristol’s Clean Air Zone at the end of the M32 on Newfoundland Road, which came into operation today on November 28 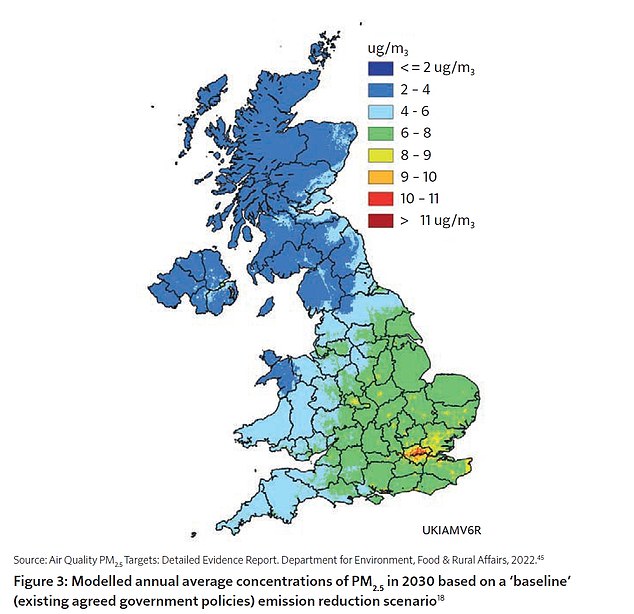 Map shows: The predicted level of particulate matter pollutants in the air in Britain in 2030, based on current agreed Government policies

Professor Whitty and colleagues suggested a raft of recommendations that could help clean up the air — including avoiding wood burning stoves, ‘accelerating’ the transition to electric cars, and getting farmers to inject their slurry into the soil to stop it spreading ammonia into the air.

The trend for ‘Chelsea Tractors’ — heavy 4×4 vehicles — also came in for criticism as they produce more particulates from their tyres and brakes, as well as their bigger engines.

Other areas that need to be tackled to curb air pollution include diesel trains idling inside railway stations.

Speaking at a press conference, Professor Whitty said that the quality of the air was a medical problem and reducing it would reduce a host of problems including heart disease, the risk of strokes and asthma in children.

An estimated 1 in 10 cases of lung cancer can be attributed to air pollution, Professor Whitty said.

He said: ‘You have no choice about the air you breathe, when you go outside, when you walk down the road, when you go into public buildings, or come back to and therefore it’s quite important that the government takes it seriously and it has done so.’

To clean up urban air, Mr Whitty said it was important to tackle motorists idling their engines — and confront thoughtless people who idle needlessly outside schools and clinics.

Mr Whitty said: ‘I think we should make really clear to people the downsides of doing this that they are actually causing significant problems, potentially to vulnerable people and I think almost every parent would consider someone who is idling a car outside their child’s school to be an incredibly antisocial person to have around. 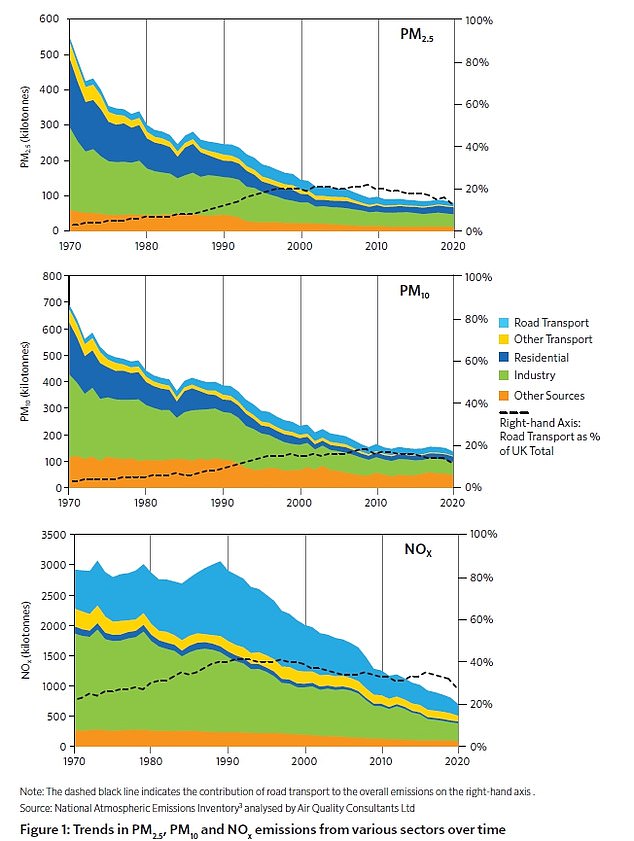 Graphs show: Concentrations of two types of particulate matters (top and middle) and nitrous oxides (bottom) in the UK from 1970 to 2020 and what sources they are caused by 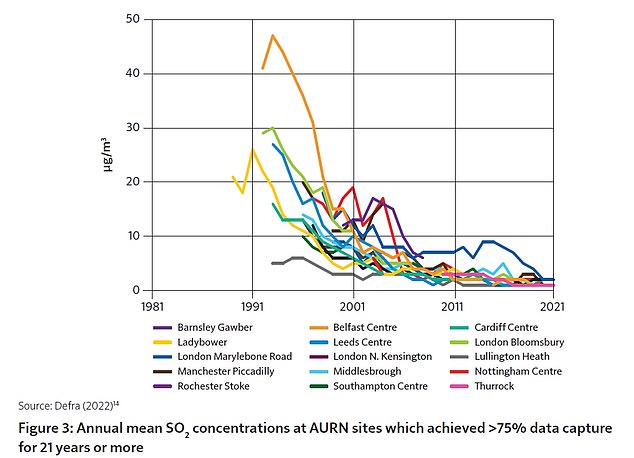 Graph shows: Sulfur dioxide levels in regions across the UK from 1981 to 2021 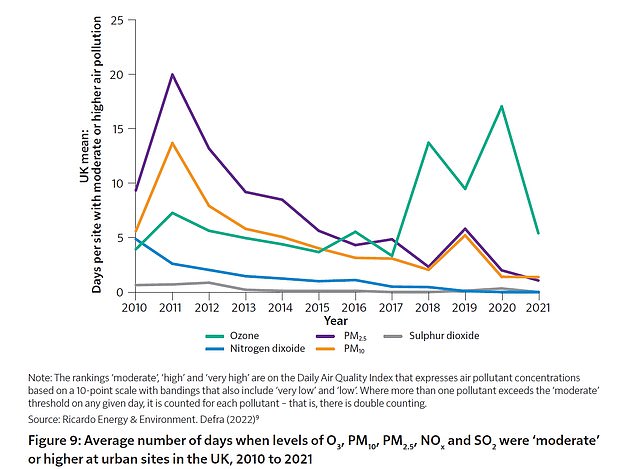 Graph shows: How many days per year cities were ranked as moderate or high for different types of pollutants from 2010 to 2021 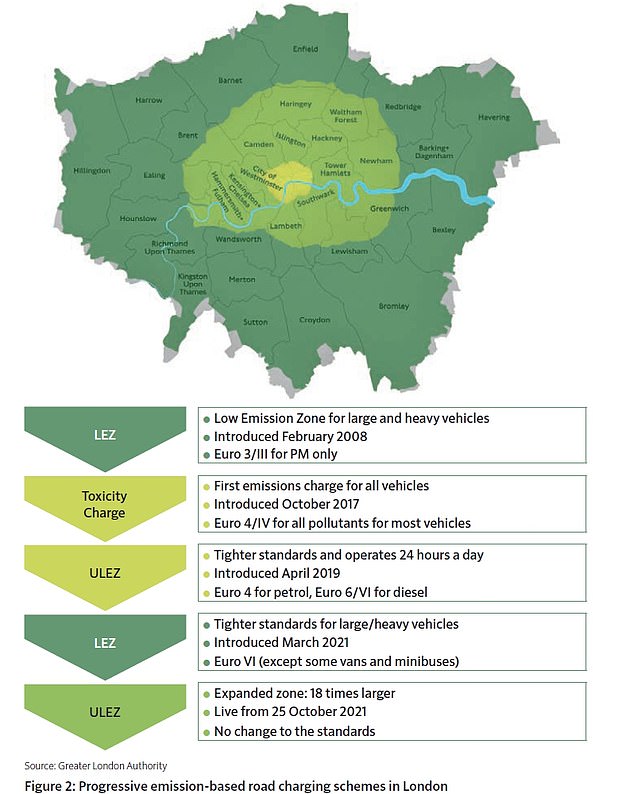 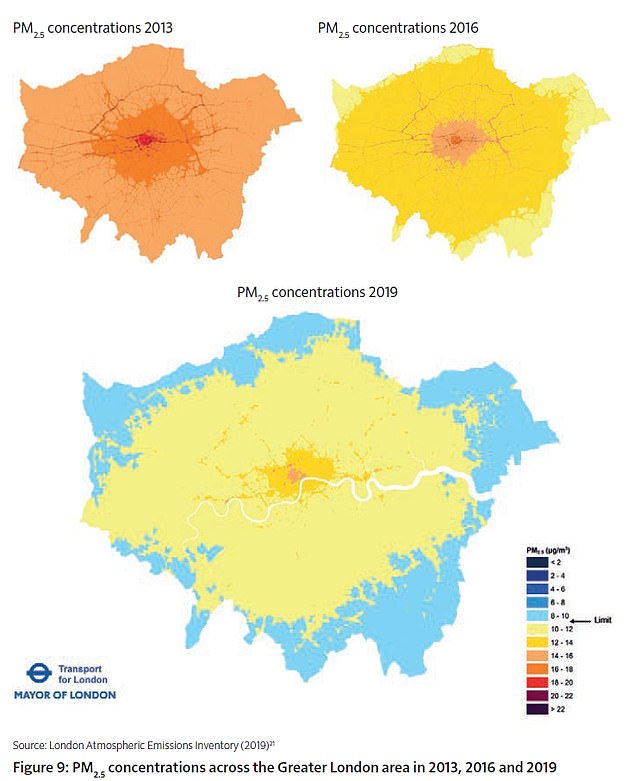 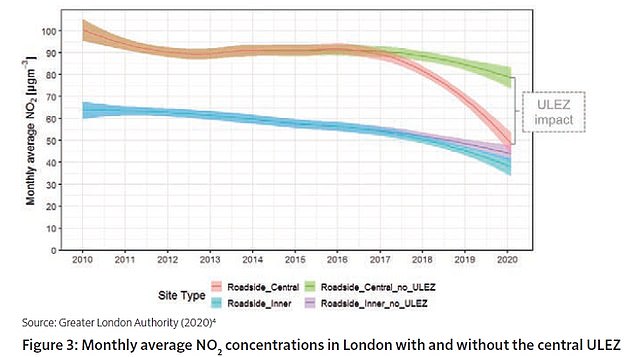 Graph shows: The fall in nitrous oxide since the ultra-low emission zone (ULEZ) was brought into London (red line), compared to areas where ULEZ is not in place (green line)

He added: ‘I think this should be about people saying and having the courage to say, look, please don’t do this.’

Professor Whitty said he did not want to ban wood burners but urged people not to use them in cities and towns while in the countryside they could be a better option.

He said: ‘There’s a big difference in my view between having a very dense urban area with everybody using wood burning, and someone doing something in a rural area where essentially them and their family and a lot of sheep.’

If people must burn wood, he said It was important that ‘modern’ woodburning stoves, approved by Defra, rather than open fires, Professor Whitty said.

He added that people use properly seasoned wood which was less polluting.

WHAT HAVE RECENT STUDIES SHOWN POLLUTION CAN DO TO OUR HEALTH AND BODIES?

CAUSE CHILDREN TO HAVE A LOW IQ: Researchers at the University of California, San Francisco, found in May 2019 that children born to mothers who live in polluted areas have an IQ that is up to seven points lower than those living in places with cleaner air.

CAUSE CHILDREN TO HAVE POORER MEMORY: Researchers at the Barcelona Institute for Global Health found boys exposed to greater levels of PM2.5 in the womb  performed worse on memory tests by the time they are 10.

DELAY THE DEVELOPMENT OF CHILDREN: Youngsters who live less than one-third of a mile away from busy roads are twice as likely to score lower on tests of communication skills in infancy, found researchers at Eunice Kennedy Shriver National Institute of Child Health in April. They were also more likely to have poorer hand-eye coordination.

MAKE CHILDREN MORE ANXIOUS: University of Cincinnati scientists claimed pollution may alter the structure of children’s brains to make them more anxious. Their study of 14 youngsters found rates of anxiety was higher among those exposed to greater levels of pollution.

CUT YOUR CHILD’S LIFE SHORT: Children born today will lose nearly two years of their lives because of air pollution, according to a report by the US-based Health Effects Institute and the University of British Columbia in April 2019. UNICEF called for action on the back of the study.

RAISE A CHILD’S RISK OF AUTISM: Researchers at Monash University in Australia discovered youngsters living in highly polluted parts of Shanghai have a 86 per cent greater chance of developing ASD. Lead author Dr Yuming Guo said: ‘The developing brains of young children are more vulnerable to toxic exposures in the environment.’

CAUSE ASTHMA IN CHILDREN: Four million children around the world develop asthma each year because of road traffic pollution, a major study by academics at George Washington University estimated. Experts are divided as to what causes asthma – but exposure to pollution in childhood increases the risk by damaging the lungs.

MAKE CHILDREN FAT: University of Southern California experts found last November that 10 year olds who lived in polluted areas when they were babies are, on average, 2.2lbs (1kg), heavier than those who grew up around cleaner air. Nitrogen dioxide pollution could disrupt how well children burn fat, the scientists said.

LEAVE WOMEN INFERTILE EARLIER: Scientists at the University of Modena, Italy, claimed in May 2019 that they believe pollution speeds up ageing in women, just like smoking, meaning they run out of eggs faster. This was based on them finding almost two-thirds of women who have a low ‘reserve’ of eggs regularly inhaled toxic air.

RAISE THE RISK OF A MISCARRIAGE: University of Utah scientists found in January that pregnant women are 16 per cent more likely to suffer the heartbreak of a miscarriage if they live in areas of high pollution.

RAISE THE RISK OF BREAST CANCER: Scientists at the University of Stirling found six women working at the same bridge next to a busy road in the US got breast cancer within three years of each other. There was a one in 10,000 chance the cases were a coincidence, the study said. It suggested chemicals in the traffic fumes caused the cancer by shutting down the BRCA genes, which try to stop tumours growing.

DAMAGE A MAN’S SPERM: Brazilian scientists at the University of Sao Paulo found in March that mice exposed to toxic air had lower counts and worse quality sperm compared to those who had inhaled clean air since birth.

MAKE MEN MORE LIKELY TO HAVE ERECTILE DYSFUNCTION:  Men who live on main roads are more likely to have difficulty getting an erection due to exposure to pollution, a Guangzhou University in China study suggested in February. Toxic fumes reduced blood flow to the genitals, tests on rats showed, putting them at risk of developing erectile dysfunction.

RAISE THE RISK OF PSYCHOSIS: In March, King’s College London scientists linked toxic air to intense paranoia and hearing voices in young people for the first time. They said uncovering exactly how pollution may lead to psychosis should be an ‘urgent health priority’.

MAKE YOU DEPRESSED: Massachusetts Institute of Technology researchers found in January that that the more polluted the air, the sadder we are. Their study was based on analysing social media users in China alongside the average daily PM2.5 concentration and weather data where they lived.

CAUSE DEMENTIA: Air pollution could be responsible for 60,000 cases of dementia in the UK, researchers from King’s College London and St George’s, University of London, calculated last September. Tiny pollutants breathed deep into the lungs and enter the blood stream, where they may travel into the brain and cause inflammation – a problem which may trigger dementia.