Home » Health News » Why drinking TEA could help you live longer, according to new study

Why drinking TEA could help you live longer: People who enjoy two cuppas a day have 13% lower odds of an early grave

It may have fallen out of favour among coffee-loving millennials — but scientists believe drinking tea may help you live longer.

A study of half a million people in the UK found those who consumed two or more cups a day were up to 13 per cent less likely to die from any cause.

There is good news if you have a sweet tooth — the protective effect remained regardless of whether people took sugar, despite its links to poor health.

Experts said the findings are among the most comprehensive yet because they were done on tea-loving Brits, unlike earlier research carried out in Asia.

Britons down a collective 100 million cuppas a day but demand, especially among young people, has fallen in recent years.

In 2021, coffee sales were more than double those of tea, rising 10 per cent to around £1.5billion, according to retail analysts Kantar. 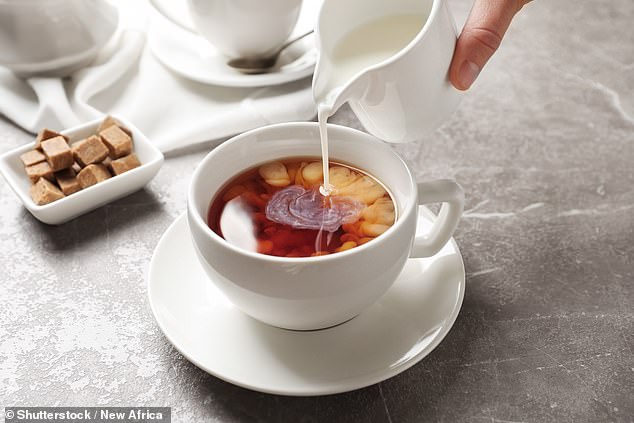 Drinking tea may help you live longer, according to a new study on half a million Brits (file image)

The latest study, carried out by the US National Institutes of Health, drew on data from around 500,000 people in the UK Biobank.

Eighty-five per cent of the men and women, aged 40 to 69, reported that they regularly drank tea.

Among them, around nine in 10 said they mostly consumed black tea.

Drinking coffee may raise your risk of cancer — but only if it’s piping hot.

It means, in theory, tea lovers could also be at risk.

Therefore, people should wait for their cups of coffee or tea to cool down before drinking them, experts advise.

Coffee is one of the most widely consumed drinks worldwide, but there has been mixed evidence on its health effects.

Some studies have suggested the beverage cuts the odds of getting cancer, while others — including the World Health Organization’s cancer research panel — have found the opposite.

Cambridge University experts compared the genes of over 360,000 people in the UK and Finland, and linked it to the risk of developing 22 types of cancer for 11 years.

Their results are published in the journal Clinical Nutrition.

No such link was found for any other cancer type.

The study was based on questionnaires carried out from 2006 to 2010 and then followed up over a decade.

Compared to nondrinkers, participants who reported drinking two or more brews each day had 9 to 13 percent lower risk of dying in that time.

The reduced risk remained regardless of people’s genes or whether they liked their tea milky.

It also did not matter if they liked their tea piping hot or preferred their cuppa to cool down.

The researchers say the findings — published in the journal Annals of Internal Medicine — suggest drinking lots of tea can be part of a healthy diet.

The observational study cannot prove that tea was behind the lower mortality risk and not other lifestyle factors.

But Professor Fernando Artalejo, a public health expert not involved in the study, described the research as representing ‘a substantial advance in the field’.

He said most studies had been done in Asia, where green tea is more popular, and the few in the West were ‘small in size and inconclusive in their results’.

‘This article shows that regular consumption of black tea is associated with a modest reduction in total and, especially, cardiovascular disease mortality over 10 years in a middle-aged, mostly white, adult general population,’ said Professor Artalejo, from the Autonomous University of Madrid.

Tea it is a rich source of healthy plant compounds called polyphenols and these act as help to control the damaging effects of cell-damaging molecules in the body.

These protective actions have been linked to a reduced risk of many chronic diseases including heart disease and dementia.

They may also contribute to improved brain function, bone density and mental wellbeing and could reduce the risk of premature brain ageing.

A 2020 study by Australian researchers found that regularly drinking black tea could reduce the risk of coronary heart disease and strokes by 10 to 20 per cent.

Part of the reason these polyphenols reduce or ward off heart disease is by helping to improve the health of the arteries, widening key ones and reducing the risk of blood clots.

Caffeine in tea is also thought to stimulate the release of digestive hormones that keep the gut healthy.