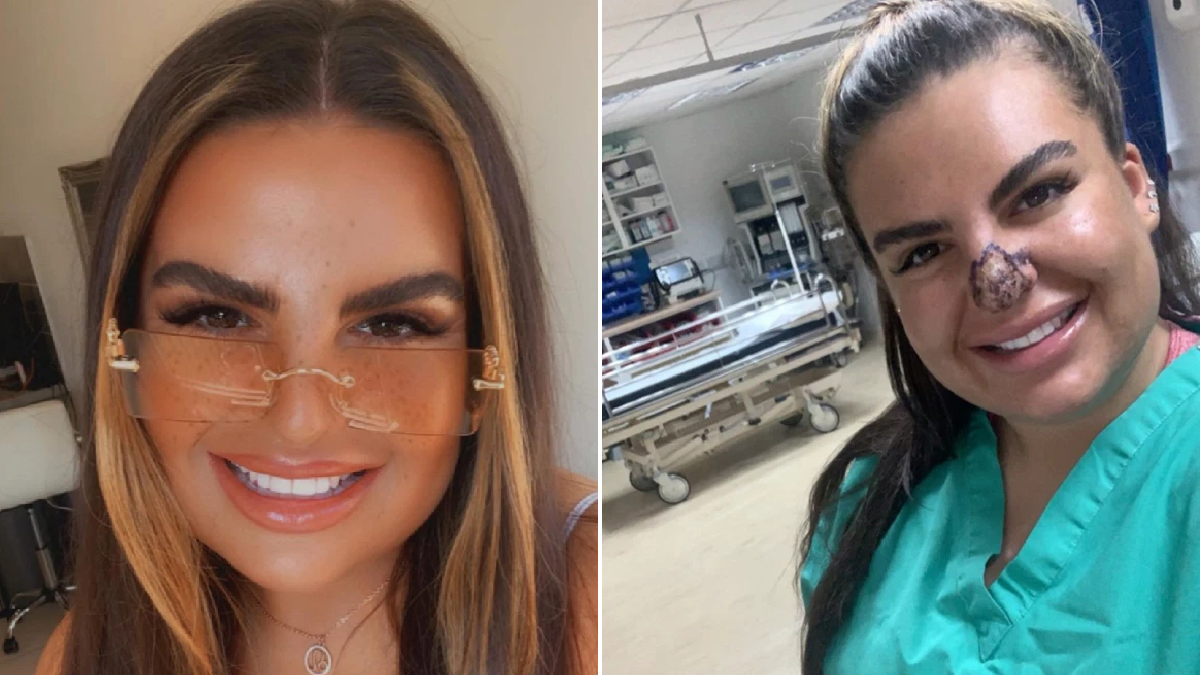 A woman nearly lost her nose and lip after claiming she had dodgy fillers inserted at a salon.

Warning: There are graphic images below.

Leah Morton, from Liverpool, was told by medics that she was most likely going to lose the tip of her nose and the top of her lip after she developed necrosis – a flesh eating bug.

The 26-year-old’s says her nose turned white and ice-cold as the flesh started to die and rot away.

Leah went to A&E a few days after the procedure on 29th April, and she was prescribed hyperbaric oxygen therapy to save as much of her nose as much as possible.

Leah says that having this special treatment every day for the past 30 days has saved the shape of her nose and her lips, however, the colour in her skin has not yet come back and her face is permanently scarred.

Leah, who works in a bank, has decided not to name the clinic where she got the filler, but she is speaking out about her experiences because she wants to warn others about the dangers.

‘I have had filler before in my lips, but I decided I wanted to get the treatment done to my nose because I have always hated the shape on my nose,’ says Leah.

‘So on 29th April, I went to the salon to have the procedure done. I wasn’t told of any risks or repercussions, it was just injected straight into my nose.

‘I went home and that evening I felt so much pain and pressure on my nose. I didn’t sleep at all that night because it felt so uncomfortable and I was weirdly having nightmares that my nose was going to fall off.

The next day, Leah checked her face in the mirror and says she was horrified to discover that the tip of her nose was white and ice cold to touch.

‘I messaged the lady who did it for me the next day to see if this was normal and she told me she wasn’t worried about it at all and it looked fine,’ she says.

‘But she said that if I was that worried that I could go and see her friend who she said was a nurse and she would dissolve it for me as she was away.

‘But she insisted I shouldn’t be losing sleep over it.’

The next day Leah visited the practitioner, a friend of the woman who did the original procedure, to dissolve the filler in her nose for her because she was sure it didn’t feel right.

Leah says she was in excruciating pain while the filler in her nose was being dissolved.

‘I had never felt pain like it. I felt intense pressure up to my eyes and I was crying when she was massaging my nose to dissolve it,’ she says.

‘Once I had got home I was still in so much pain, and there was so much pressure. It still felt blocked but I tried to get some rest because I thought that now it was dissolved it would be okay. I was so wrong.

‘I woke up on Sunday morning and there were lots of little white blisters around my nose which I discovered was the start of necrosis. My nose had started to die.’

Leah says the white blisters were spreading by the minute, and her mum and dad were desperate for her to go to A&E.

‘I did some research on social media and I found a girl in Essex who had been through something similar,’ she says.

‘She told me my nose was dying and that I needed to get to a clinic in Birmingham, called the Consultant Clinic, straight away as they would be able to help me.

‘I got on the motorway and I have never been more stressed.

‘They dissolved my nose for me properly but told me that I needed to go to A&E for antibiotics and further treatments because they confirmed I had necrosis.

‘A blood vessel in my nose had been blocked with the filler which had cause vascular occlusion.’

After arriving at the hospital Leah says she was told she just had a skin infection and that she could go home.

However, medics from the Consultant Clinic insisted it was more serious, so Leah told medics she wasn’t happy to go home because she was afraid she was going to lose her nose.

‘Eventually medics agreed it was necrosis, and that they had never seen anything like this before,’ says Leah.

‘They took a thermal image of my nose and the tip and down towards my lip was completely white meaning it was ice cold and no blood was getting to it.

‘They said that they were really worried that I was going to lose the tip of my nose and my top lip if we didn’t act fast. It felt like I was living through a nightmare. I was absolutely terrified.

‘I am a young girl, I couldn’t imagine losing my nose and lip.

‘I was then told that I needed hyperbaric oxygen therapy immediately in an attempt to save my nose as much as they could.

‘And I have been having this treatment every day for 30 days since. I am currently on a break from it as it can cause blurred vision.’

Leah hasn’t been able to go to work since the ordeal because her anxiety has been unmanageable.

So far, Leah has been able to keep the shape of the tip of her nose and her bottom lip, however, the skin in that area is damaged and uneven, and she is not sure whether she will get any colour back.

She says that while she is over the worst of it and she is extremely lucky she didn’t lose her nose, she is permanently scarred on her face.

‘I’m usually a really confident girl, says Leah, ‘but I haven’t wanted to leave my house at all for the past six weeks.

‘My anxiety has been through the roof and I have been so stressed about everything. It has been unbearable.

‘I would never get filler in my nose ever again. It is just not worth the risk.’

The salon has been contacted for a response.

Do you have a story to share? We want to hear from you.

Get in touch: [email protected]