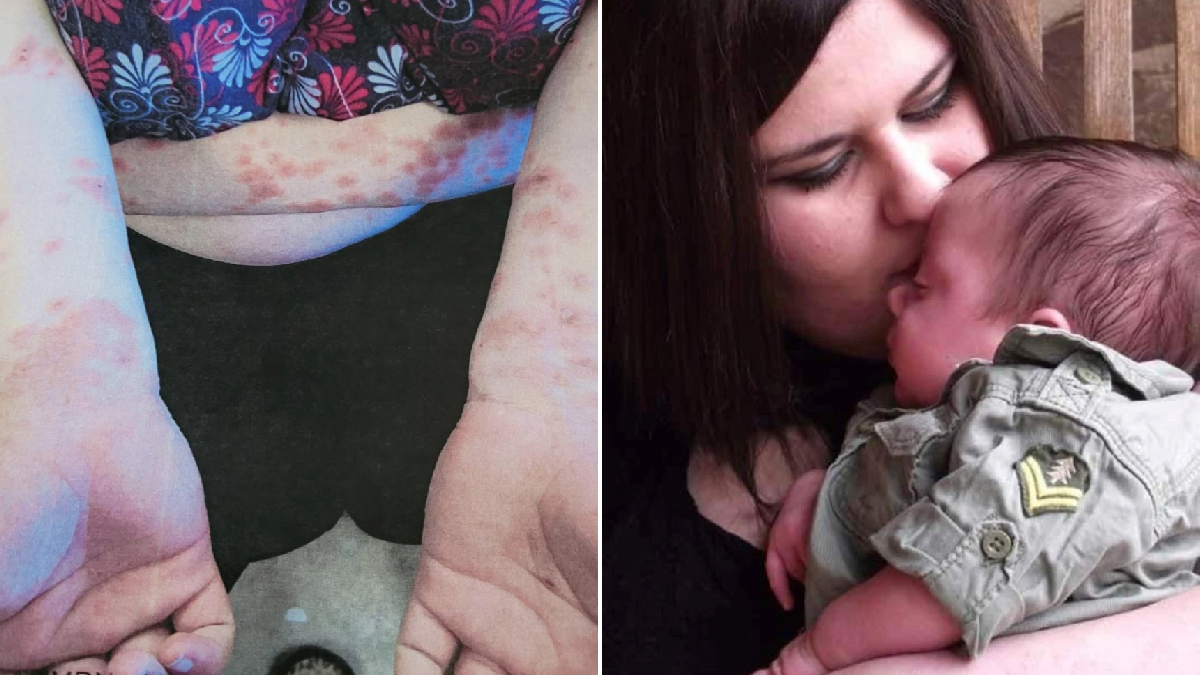 There are many surprising symptoms and conditions that can develop when you’re expecting, but this woman has to have experienced one of the worst.

It’s just like having an allergy to your own skin, and she has found it to be incredibly debilitating.

‘In the beginning of my third trimester, I would be going to sleep and would itch really badly,’ says Ashton, a law firm case manager from Kentucky, USA.

‘I would constantly be itching on my palms and feet and couldn’t fall asleep because of it. I felt like my skin was crawling.’

The problem began when Ashton started getting red bumps on her body. She went to the emergency room where she was told she had scabies. But then when blisters started forming, medical staff told her they didn’t know what was wrong.

She visited her family doctor and another emergency room before finally getting an answer from a dermatologist who identified the disease. The condition is so rare that it only affects one in every 40,000-50,000 pregnancies.

‘That dermatologist had seen one case of it before in 12 years. I was my obstetrician’s first case in 30 years,’ says Ashton.

‘I couldn’t wear clothes because the blisters would weep and my clothes would stick to them and dry, so when I went to take my clothes off, my skin came with it. I had to wear hospital gowns so it wouldn’t stick to my skin.’

Though Ashton stopped getting new outbreaks a week before giving birth, the disease still affected her labor.

‘They ended up having to put me to sleep to do a c-section because they found out during labor that the disease blocked off my pain receptors,’ she adds.

‘They said as soon as they took the baby out, my skin changed color right in front of them. It went from being red and inflamed to being purple, almost scar-like.

‘I didn’t have any new outbreaks after that, but it took me two to three years to heal from the scarring.’

But although she gave birth to her son Dane back in 2010, Ashton still gets flare ups.

‘I still get mild outbreaks when there’s hormonal changes or stress,’ she says.

‘Pregnancy triggers the auto-immune condition, so even though it was dormant in me before, I’ll always have issues with it with any hormone changes or stress once it came out.’

After recently suffering an outbreak, Ashton decided to post pictures from her pregnancy on TikTok to try to bring more awareness to the disease.

‘I just wanted to spread awareness of it because I thought that it’s so rare and a lot of medical students and doctors don’t know about it because it doesn’t pop up that often,’ she says.

‘I couldn’t imagine having it and not knowing what it was, so even if it helps just a handful of women or doctors to know what this is because they’ve seen my video and it looks familiar, helping them would make the world of difference for me.’

She also wants to make sure she isn’t scaring people, she is keen to impress just how rare the condition is and how unlikely you are to get it.

‘I saw a lot of people under the post saying, “if this is something that comes with pregnancy, I don’t want it”, and I just want people to know this isn’t something they’ll likely face,’ she says.

‘It’s very rare and it’s not something they should add to a list of pregnancy concerns.

‘I really just want the knowledge that being allergic to your skin is possible because it sounds crazy. Educating yourself on it could really make a difference in somebody’s life.’