The umbilical cord is the structure that attaches the fetus to the placenta and acts as the medium through which nutrients, gases and waste products travel between the mother and the fetus. 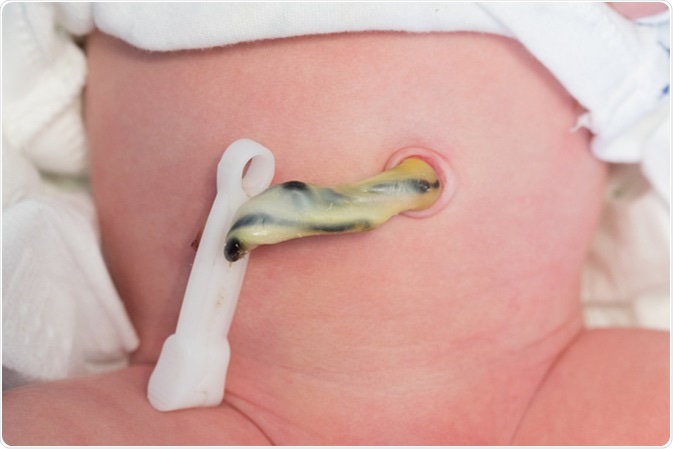 Umbilical cord cut and clamped right after birth of the newborn baby but still attached to the navel. Image Credit: Semmick Photo / Shutterstock

After birth the umbilical cord is usually cut and this leaves the umbilical cord stump. This is moist and rich in blood, which has the potential to become infected. The infective organisms may arise from the birth canal, the hands of the delivery attendant, or the environment in which the birth occurs. Umbilical sepsis is also called omphalitis, but can spread quickly to result in conditions such as neonatal sepsis.

The cord is usually cut and clamped soon after delivery, preferably after umbilical cord pulsations have ceased. The clamps are placed from 1-5 cm from the base of the cord, depending on the risk of infection. It should be long enough to protrude from the diaper or nappy without getting wet. The attendant’s hands should be cleaned with soap and water, the blade should be sterile, and the tie or clamp should be sterile.

Care of the Stump

The cord should be checked for bleeding every hour for the first two hours and daily thereafter.

The umbilical stump is to be kept dry and clean until the cord shrivels and dries up, to eventually fall off. This usually happens within 5 to 15 days. During this time the baby should not be tub-bathed to prevent moisture from accumulating within the crevices of the stump. A daily sponge bath will keep the baby cool and clean.

Soft gauze and water should be used to clean the cord stump at its attachment to the abdomen only when debris or other matter is observed to collect there. It should be gently cleaned and mopped dry. The baby should be sponge-bathed during this period. Diapers should be folded down to keep the stump as much exposed to air as possible.

No adhesive or airtight dressing should be applied. Buttons, coins or other objects, or bandages, should not be applied to the belly in this region.

The stump should never be pulled loose even if it appears to be hanging by just a thread. This is to ensure the tissue dries out completely, leaving a clean dry stump. On the other hand, the stump could start bleeding if the stump is removed too early. This may again promote infection.

The presence of infection markers should be watched for carefully, such as redness at the base of the stump, foul-smelling or yellow discharge from the stump, or the evidence of swelling or tenderness around the stump. If the baby stops feeding, has fever, or becomes lethargic, umbilical sepsis is a possible cause.

Instead of active infection a low-grade chronic sepsis may manifest as what is called a granuloma. This appears as red or pink bumpy soft tissue at the tip or base of the stump, and  secretes a serous or straw-colored discharge. In most cases granulation tissue resolves within a week, but if not, it may require treatment.

Failure of the umbilical stump to fall off may be because of poor immunity or abnormal umbilical vessels. This should be suspected if the stump is still attached at 4 weeks, though suspicion may arise much earlier.

The World Health Organization propagates the dry method of umbilical cord care. This avoids the use of ointments or lotions on the cord stump altogether, leaving it either exposed to air (preferable) or covered by a loose clean cloth. Chlorhexidine application is recommended in those regions of the world where hygiene is poor and omphalitis or neonatal sepsis rates are high. Any person who touches the cord should make sure the hands are clean. Only boiled and cooled, or sterile water should be used with sterile gauze to clean the stump when necessary.