Cinnamon is a popular spice that is used worldwide. This aromatic spice belongs to the genus Cinnamomum; however true cinnamon comes from a specific species termed C. verum. Both species are nearly identical in composition, but true cinnamon has the advantage of a low coumarin content, which is better for the liver. 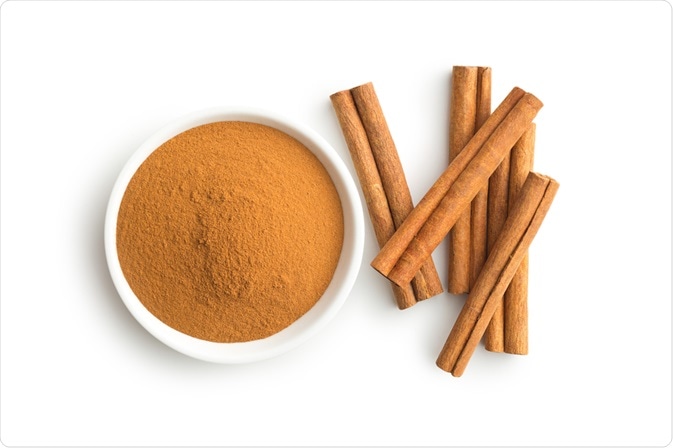 What is the chemical composition of cinnamon?

Almost every part of the cinnamon tree (bark, root, leaves, flower, and fruits) possesses medicinal properties. The main chemical constituents include vital oils and resinous derivatives such as cinnamaldehyde, cinnamate and cinnamic acid. The spicy taste and fragrance of cinnamon can be attributed to the presence of cinnamaldehyde. As cinnamon ages, the increasing amount of resinous elements imparts a dark color.

What are the health benefits of cinnamon?

Cinnamon is known to possess anticarcinogenic, antioxidant, anti-inflammatory, antidiabetic, and antimicrobial properties. It has also been reported to have beneficial effects on neurologic conditions such as Alzheimer’s disease and Parkinson's disease.

Several studies have demonstrated the anti-inflammatory activities of cinnamon. According to a 2005 study published in the Biochemical Pharmacology, 2′-hydroxycinnamaldehyde isolated from cinnamon bark inhibited the production of nitric oxide, which plays a key role in pathogenesis of inflammation. Hence, cinnamon could be used as an anti-inflammatory agent for the treatment or prevention of inflammation-mediated diseases.

Polyphenols isolated from cinnamon have been found to act as insulin-like molecules. Many mechanisms have been postulated for the glucose-lowering effects of cinnamon. Cinnamon has been shown to increase glucose entry into cells.

It has also been postulated that cinnamon increases expression of peroxisome proliferator-activated receptors (PPARs), which have been associated with a glucose-lowering effect. Cinnamon has also been known to have an inhibitory effect on enzymes involved in carbohydrate catabolism.

Cinnamon has been shown to have beneficial effects on neurologic conditions such as Parkinson’s disease and Alzheimer's disease.

According to a study by scientists at the Rush University Medical Center, cinnamon may protect dopaminergic neurons in patients with Parkinson’s disease. Their study demonstrated that cinnamon is involved in upregulating proteins Parkin and DJ-1, which leads to the protection of dopaminergic neurons in a mouse model of Parkinson’s disease. These results, if they can be replicated in humans, could offer a novel therapeutic option for patients with this disease.

Another study published in the Journal of Alzheimer's Disease showed that cinnamon extracts have inhibitory actions on tau aggregation and filament formation, which are characteristic features of Alzheimer's disease.

Several studies have demonstrated the antimicrobial activities of cinnamon on bacteria, yeast, and fungi. The combination of cinnamon bark extract and honey has been shown to be useful against acne-causing bacteria.