Home » Health Problems » How Does Shisha Compare to Cigarette Smoking?

Smoking shisha originally arose as a traditional form of smoking particularly in Asian and Middle Eastern communities. It has recently gained popularity in shisha bars in the West – in fact, public health officials have recently given it the status of an epidemic.

The practice of smoking shisha involves burning charcoal in order to heat up a special preparation of tobacco (shisha) which often contains molasses, honey and/or fruit flavorings. When the shisha is heated up, smoke is produced that then bubbles down through a container of water and into a long hose-like tube fitted with a mouthpiece. 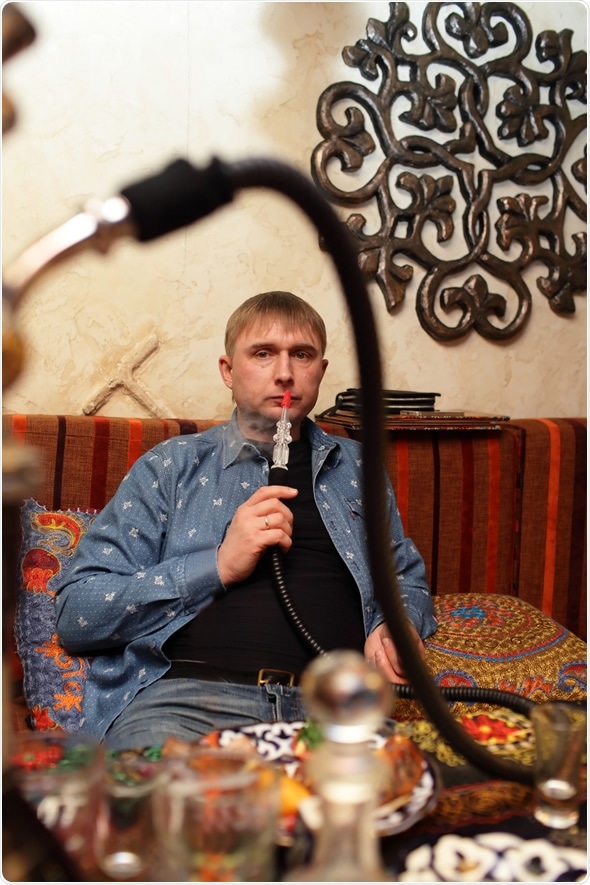 In contrast to cigarette smoking, there is a severe lack of education on smoking shisha and a great deal of misleading advertising associated with it. Unfortunately, these have made people feel that it is a less harmful alternative to smoking cigarettes. In fact, a study by the CDC in 2012 revealed that those who smoke shisha consider it less harmful than smoking cigarettes.

In reality, shisha smoke may yield over 30 times more carcinogenic tar than cigarette smoke and up to 15 times more carbon monoxide. Some toxic metals (including lead, nickel and arsenic) can also result, however, interpreting the implications of the lower levels of toxic metals in shisha smoke can be difficult. For example, scientists with the University of Cincinnati think that the lower levels of arsenic, lead, cadmium and chromium found in shisha smoke are not indicative of the filtering through water. Additionally, as excess amounts of those metals were not present in the shisha water, it seems that shisha itself may contain less of those metals.

Studies have shown that the typical hour-long shisha smoking session involves between 20-200 puffs, compared to an average cigarette amounting to 8-12 puffs. The frequency of smoking also needs to be considered – many people who smoke shisha smoke less often than cigarette smokers. One must further consider that due to the longer duration of a shisha session compared to that of smoking a cigarette, even though the peak concentration of nicotine is the same in the cigarette and shisha, a shisha smoker ultimately has a higher exposure to nicotine.

People also incorrectly feel that the water sufficiently filters the tobacco smoke to ensure that the inhaled smoke is safer. As the water does not actually cleanse the smoke of all toxic substances, some of the nicotine is absorbed by the user. This leads to people smoking for longer durations in order to experience the effects of a higher nicotine concentration, and therefore inhaling more smoke.

As shisha contains tobacco it is linked to the same serious illnesses as cigarettes, such as lung cancer, heart disease, infectious diseases, and complications during pregnancy. Interestingly, there has been a recent shift in popularity, highest in older males to educated 18-24 year olds in cities. Part of this may be due to the fruity taste of shisha which has gained a great deal of popularity amongst the younger smokers, particularly in younger smokers who dislike the taste of traditional tobacco.

If the shisha pipe is poorly cleaned and shared amongst users it can increase the risk of contracting infectious diseases, such as tuberculosis, hepatitis and meningitis amongst others.

Unlike cigarettes, shisha is burnt using charcoal or wood cinders so users can also be exposed to dangerously high levels of carbon monoxide gas. This can result in carbon monoxide poisoning which happens when the carbon monoxide in tobacco smoke causes a reduction in the amount of oxygen carried in the blood so the heart must pump harder to supply the body with sufficient oxygen.

Afsaneh graduated from Warwick University with a First class honours degree in Biomedical science. During her time here her love for neuroscience and scientific journalism only grew and have now steered her into a career with the journal, Scientific Reports under Springer Nature. Of course, she isn’t always immersed in all things science and literary; her free time involves a lot of oil painting and beach-side walks too.