Following a diagnosis of adrenal cancer, there are several treatment options that may be used. Each of these techniques has unique advantages and disadvantages that will make it preferable for some cases and not others. As adrenal cancer is relatively rare, it can be worthwhile to collaborate with other endocrine specialists to discuss the best treatment options for the particular case. 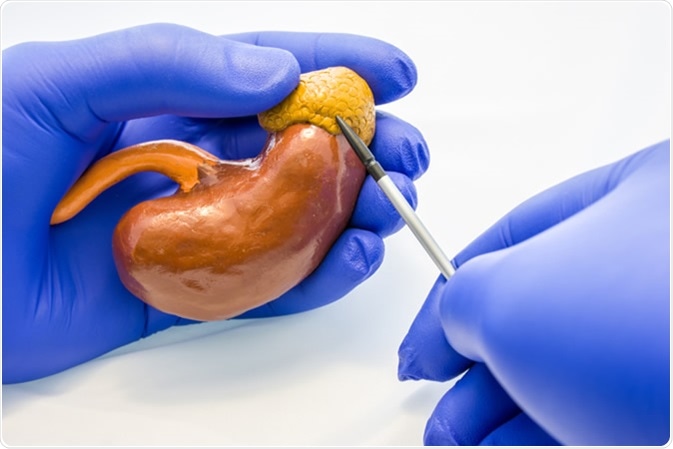 Doctor or scientist holds in hand model of adrenal gland with kidney organ and points with pointer on gland body in other hand. Image Credit: Shidlovski / Shutterstock

The most common treatment for adrenal cancer is adrenalectomy or surgical removal of the adrenal gland. In this procedure, the cancer is removed as much as possible, including areas where the cancer has spread to such as nearby lymph nodes.

If the cancer has metastasized to other areas of the body, such as the liver, surgical removal of these secondary tumors may also be needed.

For small adrenal tumors, a laparoscope can also be inserted into the adrenal gland to view the tumor and remove it. This is most commonly used for smaller tumors and helps to reduce recovery time. However, it cannot be used for larger tumors as the whole tumor should be removed in one piece to reduce the risk of recurrence.

Radiotherapy, which involves a focused beam of high-energy radiation, can be used to target the region of the cancerous cells in the adrenal gland. This is usually used as adjuvant therapy, in addition to other techniques such as surgery.

External beam radiation therapy uses a machine outside of the body to direct the radiation towards the adrenal gland. The radiation is usually administered once or twice a day, five days a week for a treatment period of approximately 6 weeks. In this type of radiation therapy, the surrounding tissue that the radiation passes through before it reaches the tumor is also affected. Treatment times are kept short to minimize this, but some adverse effects may be experienced.

Internal radiation therapy, also known as brachytherapy, uses small pellets of radioactive material, which are placed inside the body next to or inside the tumor. This is usually left inside the body for a few days then removed. The localization of the radiation helps to reduce exposure to the surrounding tissues.

Other chemotherapeutic agents, which are often used in combination with mitotane, may include:

There are several other medications that may be used in the treatment of adrenal cancer, primarily to reduce the production of hormones related to the tumor. These may include:

Yolanda graduated with a Bachelor of Pharmacy at the University of South Australia and has experience working in both Australia and Italy. She is passionate about how medicine, diet and lifestyle affect our health and enjoys helping people understand this. In her spare time she loves to explore the world and learn about new cultures and languages.