Malaria is caused by the transmission of the malaria parasite Plasmodium to humans by the bites of female Anopheles mosquitoes. 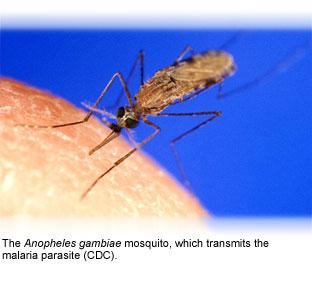 Plasmodium parasites’ primary hosts and transmission vectors are female Anopheles mosquitoes. Humans and other vertebrates are secondary hosts. The mosquitoes first take in the parasite by feeding on the blood of an infected person.

In the mosquitoes’ gut the gametocytes (male and female) from the infected person fuse to form ookinete that penetrates the gut lining and produces an oocyst in the gut wall. When the oocyst ruptures, it releases sporozoites that migrate through the mosquito's body to the salivary glands sporozoites. This is the phase of sexual reproduction. The mosquito then becomes ready to infect a new individual.

Only female mosquitoes feed on blood, thus males do not transmit the disease. The mosquitoes bite at night between dusk to dawn. Transmission is also possible by blood transfusions from an infected person.

Pathology of malaria within human hosts

Once within the humans the malaria parasite undergoes two phases – an exoerythrocytic and an erythrocytic phase.

The exoerythrocytic phase involves maturation and development of the parasite in the liver. When an infected mosquito transmits the infection or sporizoites as it takes in a blood meal the sporozoites in the mosquito's saliva enter the bloodstream and migrate to the liver.

The parasite then forms thousands of merozoites within the hepatocytes. The numerous merozoites lead to rupture of their host cells and escape into the blood.

Sometimes the sporozoites may not immediately go into the exoerythrocytic-phase merozoites, but instead produce hypnozoites that lie dormant in the liver. This is seen with Plasmodium vivax and Plasmodium ovale. The periods of dormancy may range over several months (typically 6–12 months to around 3 years). Hypnozoites are responsible for long incubation and late relapses in these two species of malaria.

Several such amplification cycles occur. Each such amplification is thus characterized by a wave of fever. Some of the merozoites develop into male and female gametocytes that may be further transmitted to mosquitoes. This completes the lifecycle.

Effect of malaria on the immune system

Normally the RBCs undergo destruction in the spleen at regular intervals. Infected RBCs especially those with Plasmodium falciparum escape this destruction by developing adhesive proteins on the surface of the infected blood cells, causing the blood cells to stick to the walls of small blood vessels. This leads to sequestering the parasite from passage through the general circulation and the spleen.

These proteins are also thought to be the cause of complications caused by this type of malaria parasite. They are called PfEMP1, for Plasmodium falciparum erythrocyte membrane protein 1 and have a variety and diversity and thus cannot be targeted by the antibodies formed in the body.