There are a wide variety of medications available to relieve the symptoms of various mental health conditions, some of which act on specific neurotransmitters and increase their levels in the brain. One such neurotransmitter is norepinephrine.

The monoamine hypothesis suggests that the basis of depression is a reduction in the levels of serotonin, dopamine, and norepinephrine in the body. Norepinephrine plays a role in a number of functions including memory, attention, stress reactions, energy levels, and the regulation of emotions.

Norepinephrine is another term for noradrenaline. It is a stress hormone released into the blood that also functions as a neurotransmitter in the central nervous system, and is produced by the adrenal medulla. It affects the areas of the brain that are responsible for controlling attention and action. It is also connected to the fight or flight response, and can increase the heart rate, release glucose from energy stores, and increase the blood flow to skeletal muscle. 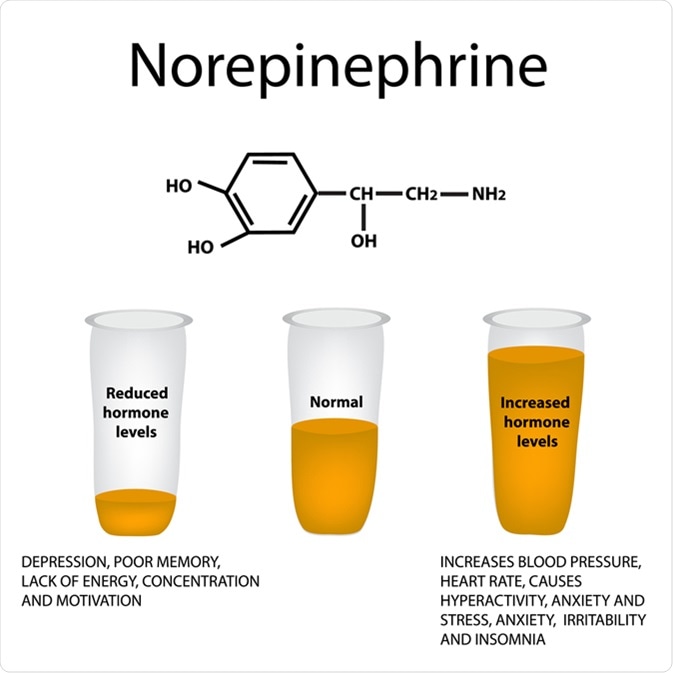 What does Norepinephrine do?

When physiological changes are triggered by a stressful situation, the locus ceruleus in the brain is activated, in turn causing the release of norepinephrine. In the sympathetic nervous system, norepinephrine is released from neurons to trigger the fight-or-flight response in various tissues.

It is thought that reduced neurotransmission of norepinephrine can result in:

Norepinephrine release may have a pronounced effect on large areas of the brain, which is why it has found clinical use in treating psychiatric disorders.

Antidepressants called selective serotonin reuptake inhibitors (SSRIs) and serotonin-norepinephrine reuptake inhibitors (SNRIs) are regularly prescribed to relieve symptoms of anxiety, depression, and occasionally attention deficit hyperactivity disorder (ADHD). These antidepressants increase the amount of serotonin and norepinephrine that postsynaptic brain cells have access to. They work by inhibiting the reuptake (or absorption) of serotonin and norepinephrine by nerve cells, making more of these neurotransmitters available to signal other nerve cells.

There is evidence suggesting that the newer class of medication, SNRIs, have a more effective antidepressant action than SSRIs because they enhance the activity of both serotonin and norepinephrine. However, SNRIs do pose a risk of greater side effects when compared with SSRIs. Some side effects from SNRIs include:

Despite the presence of numerous explanations as to the how and why of depression, the clinical development of antidepressants is still focused on the inhibition or reuptake of serotonin or norepinephrine. However, there is evidence suggesting that norepinephrine does play an important role in depressive disorders.

Studies have shown differences in the norepinephrine system between depressed patients and healthy control patients post-mortem. Studies have also shown that when norepinephrine is depleted within the brain, it results in the return of depressive symptoms, even after treatment with norepinephrine-based antidepressants. They reveal that antidepressant therapies focusing on increasing norepinephrine levels are effective in treating depression. It has also been found that the limbic system, which is responsible for regulating emotions, is supplied by projections of norepinephrine from the locus ceruleus.

Although SNRIs can produce anxiogenic (anxiety-inducing) reactions, the norepinephrine system is arguably better described as a modulator that has both anxiogenic and anxiolytic (anxiety-reducing) effects of varying severity.

Norepinephrine activates the amygdala, the part of the brain implicated in producing fear-related behaviour. The amygdala can also enhance long-term storage of stressful memories in the hippocampus and striatum. There is convincing evidence suggesting that neurons that contain and secrete norepinephrine are activated when the body experiences stress.

When a person experiences chronic stress, the levels of norepinephrine may fall below normal due to the development of underactivity of the stress response system following prolonged exposure. Chronic stress can precipitate anxiety disorders and depression, which is often seen in conjunction with anxiety.

Low levels of norepinephrine and another neurotransmitter, dopamine, can affect a person’s ability to concentrate and keep focus, and may lead to the development of ADHD. However, two studies presented results that showed children with ADHD had high levels of norepinephrine in their 24-hour urine sample. A higher level of norepinephrine in urine is associated with higher levels of hyperactivity. It is important to note that urine collection to measure neurotransmitters is not a perfect method, and is not used to diagnose psychological disorders as it is impossible to measure the amount of neurotransmitters in different parts of the brain, or to assess whether they are being transported or functioning properly. But generally, there is sufficient correlation between urine samples and levels in the brain and nervous system to give some merit to this testing technique.

The exact mechanisms of many psychiatric disorders are still not fully understood despite the wide availability of many clinical treatments. However, a reduced level of norepinephrine has been indicated in studies investigating the cause of depression, and conversely, higher levels of norepinephrine in urine are correlated with increasing severity in ADHD. A newer class of antidepressant drugs, SNRIs, target norepinephrine neurotransmitters, and although they present more side effects, they are thought to be more effective than SSRIs, which target both serotonin and norepinephrine.

Lois is a freelance copywriter based in the UK. She graduated from the University of Sussex with a BA in Media Practice, having specialized in screenwriting. She maintains a focus on anxiety disorders and depression and aims to explore other areas of mental health including dissociative disorders such as maladaptive daydreaming.