Recently, it has been found that Helicobacter pylori infection also causes fluctuation in motor functions among patients with Parkinson’s disease (PD). 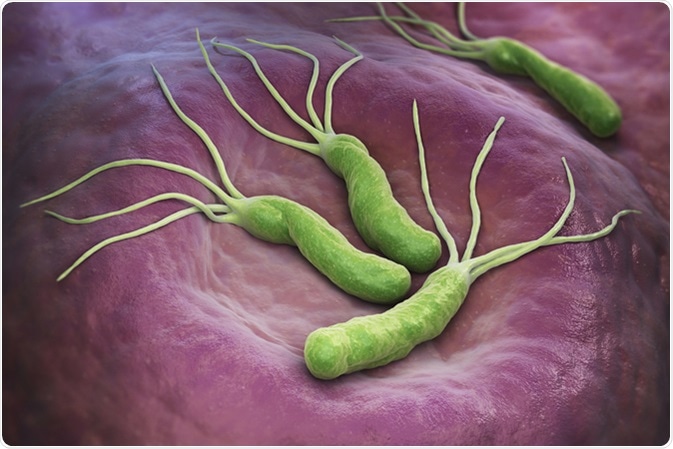 What is Helicobacter pylori?

Helicobacter pylori is a common bacterium, first discovered by Warren and Marshall in 1983. It usually infects the luminal surface of the gastric epithelium and causes inflammation of the gastric mucosa.

The common signs and symptoms of a Helicobacter pylori infection include stomach ache, burning sensation in the abdomen, nausea, frequent burping, loss of appetite, weight loss, and bloating.

An association between PD and gastric ulcer was first established in 1960. Later on, several scientific studies have revealed that the prevalence of Helicobacter pylori infection is significantly higher among PD patients.

One large cohort study involving the Danish population has revealed that the use of drugs to eradicate Helicobacter pylori infection and of proton pump inhibitors (for treating gastritis) for 5 or more years before the diagnosis of PD increases the risk of PD onset by 45% and 23%, respectively.

Several hypotheses have been proposed to explain the association between Helicobacter pylori infection and the development of PD.

One such hypothesis states that Helicobacter pylori infection increases the level of cholesterol glucosides, which act as neurotoxins and increase the degeneration of dopaminergic neurons in the brain.

Several studies have identified impaired drug absorption to be the main cause of HP-mediated development of PD is. It is believed that Helicobacter pylori affects the absorption of drugs necessary to treat PD by altering the pH level of the gastrointestinal tract.

This not only precipitates the development of PD but also causes motor function in PD patients to become erratic. It has been found that antibiotic-mediated eradication of Helicobacter pylori increases drug bioavailability by increasing its absorption by 21 to 54%.

Helicobacter pylori eradication has also been shown to reduce motor fluctuations, tremors, and muscle rigidity, as well as improve locomotion in PD patients.