Home » Health Problems » What is Iridoschisis?

Iridoschisis is a condition described by Schmitt in 1922, but so named in another case report by Lowenstein and Foster in 1945. In this condition, the front portion of the iris (anterior layer of the iris stroma) becomes separated from the back portion (posterior iris stroma and muscle fibers). It then degenerates to form thin fibers attached at only one end, while the other ends float in the aqueous humour.

The iris essentially splits into numerous fibrils which, upon degenerating, move freely at the front of the eye, giving a ‘shredded’ appearance. Pupillary function is not affected and the pupils remain round and reactive. The vascular supply and blood flow through the iris remain normal.

Iridoschisis is rare, with only around one hundred cases reported so far. Two of every three cases of iridoschisis have been associated with end-stage glaucoma in either one or both eyes. Iridoschisis usually affects people aged between the ages of 60 and70 years. Typically, the splitting and degeneration of the iris occurs in the inferior portion (bottom half), and usually affects both eyes, although it may initially start in one eye. 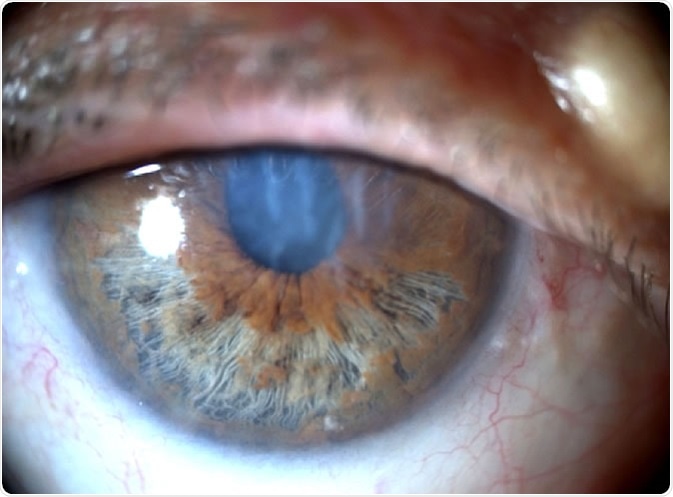 The main cause of iridoschisis is still not known, although most cases have suggested links to glaucoma (increased pressure within the eye). Glaucoma is reported in over 60% of all patients suffering from iridoschisis. It is still unclear as to whether glaucoma causes iridoschisis or glaucoma occurs subsequent to iridoschisis. It may be that the floating fibrils from the degenerating iris interact with the tubercular meshwork leading to increased intraocular pressure, and causing angle closure, which is a feature of glaucoma.

It is also suggested that iridoschisis might be attributed to congenital deformities of the development of the eye, specifically of the iris.  Age alone cannot be a factor due to the rarity of the condition. Thus a predisposition to iris weakness may cause the condition.  There has been a case report of a family with iridoschisis accompanied with cataracts. In this family, the condition is inherited in an autosomal dominant fashion, making it more credible that there may be a genetic basis for iridoschisis.

The degeneration of the iris is essentially irreversible. However, since a majority of patients with iridoschisis suffer from glaucoma, it is important to to treat it and so prevent further complications and possible vision loss.

As most patients with iridoschisis have cataracts, successful cataract removal can alleviate the symptoms of angle closure in glaucoma. Other surgical interventions include trabeculectomy. Here a small hole is made in the sclera to allow the aqueous humor to escape from the anterior chamber, which lowers the pressure inside the eyeball. Finally, patients can also have laser peripheral iridotomy, which is the preferred treatment for glaucoma, if the pupils are partially blocked.

Osman is a Neuroscience PhD Research Student at the University of Sheffield studying the impact of cardiovascular disease and Alzheimer's disease on neurovascular coupling using pre-clinical models and neuroimaging techniques.