Home » Why Are Schools Still Spreading The Message That Black Lives Matter Is A Political Statement?

Black Lives Matter still isn’t a political statement. Yes, it is a statement. It’s a passionate statement. It’s a powerful statement. “Black Lives Matter” are words that feels empowering to some, and like a cry for help to many. And for others, it seems to be a fear-inducing statement, and even a threat. But that’s how fear works. When you fear something like a statement or movement, there’s a chance that’s because you don’t understand what it means or where it originated, or even the intention behind it. 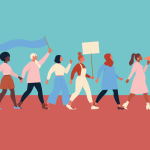 This Mother's Day, Can We Be the Mothers George Floyd Called Us to Be?

As a Black parent, when you learn that little boys and girls around the country who have worn T-shirts that say “Black Lives Matter” have been removed from class and kicked out of daycare, it’s beyond frustrating. Just last week, two brothers in Oklahoma, ages 8 and 5 (they attend different schools)m were made to sit in an office or turn the shirt inside out the entire school day when they wore their T-shirts. Last summer, a 6-year-old girl in Arkansas was told she was “no longer welcome” at the daycare she attended for six months because her shirt said “Black Lives Matter.”

While it’s true that BLM is an emotionally charged movement, is it also true that being proud of who you are shouldn’t be called a political statement.

When it comes to the roots of the statement “Black Lives Matter,” we can go back just eight years ago. In July 2013, three Black women and organizers — Alicia Garza, Patrisse Cullors, and Opal Tometi — created a Black-centered movement building project called Black Lives Matter that began with a social media hashtag, #BlackLivesMatter, after the acquittal of George Zimmerman in the shooting death of Trayvon Martin in February 2012. Unfortunately, the movement grew. Unfortunate because it’s a shame that the senseless deaths continued from Michael Brown in Missouri to Eric Garner in New York to George Floyd in Minneapolis, and hundreds of others, so many that they have to be reduced to a hashtag.

According to the BLM website, the mission is this: “By combating and countering acts of violence, creating space for Black imagination and innovation, and centering Black joy, we are winning immediate improvements in our lives.”

How about putting it in this perspective? Black Lives Matter began in 2012 with the killing of a young boy with a pack of Skittles who looked threatening to a grown man with a gun, and the young boy ended up losing his life. As a parent, if you have a grade-school-aged child, it’s likely that they’ve grown up with the phrase “Black Live Matter,” like some of our parents grew up with the chant “No justice, no peace,” or singing, “The answer my friend, is blowing in the wind.”

Granted, there’s a lot to unpack about our history as a nation. So much emotional and psychological harm has been done that has brought the collective “us” to this point, where it has to be stated that a certain race of people matter. Some may read the above BLM mission and not like the idea of “creating space” for “Black joy,” but this is the language of human rights, and unfortunately, human rights haven’t come as naturally and easily as they should.

Honestly, it’s a shame that “Black Lives Matter” even needs to be said. That it’s a chant, a hashtag, a logo that’s put on T-shirts like a favorite baseball team or pop singer. But here we are.

While Black Lives Matter has become a movement, it’s all about people. People asking, demanding, begging to be treated equally. Not better than, just equally. It’s not tied to a political party, so schools should not be teaching that message.

Add these children’s books starring boys of color to your kids’ shelves.